Dogs make great rescuers with their keen senses and unwavering loyalty. A deaf woman who was hiking in Alaska, quickly realized how amazing dogs are when one came to her rescue after she was injured from a fall.

21-year-old Amelia Milling was hiking near Eagle River in Alaska. The Tennessee student set out on the three-day solo hike with her trekking poles, pack, and tracking device. Everything was going well until she encountered more snow than she expected. Milling is an avid hiker and had done multiple hikes in the past 5 years. However, being from the south she was not used to snow and it led to a fall. 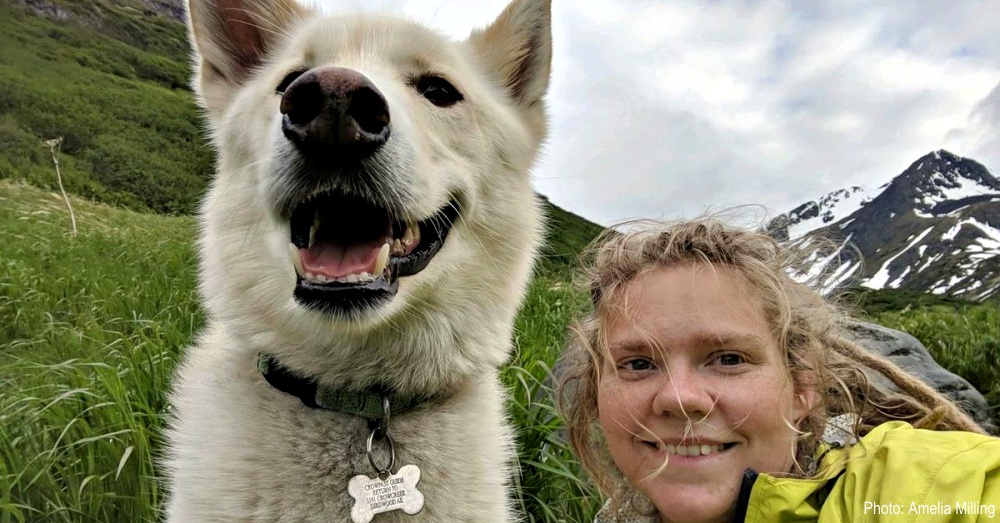 She attempted to descend into the Eagle River Valley, but instead slid losing her poles and went airborne when she hit a rock. “I felt like I was flying,” she tells Anchorage Daily News through an interpreter.

After landing, she slide another 300 feet down the mountain. When she finally came to a stop, she looked up to see a large white dog. At first she thought it was a wolf, but then saw a collar with a tag. The tag read Crow Creek guide dog.

7-year-old Siberian husky named Nanook is very familiar with the area. He visits it often leading lost hikers back to the trail. Milling was relieved to have the dog help her find her way. She set up camp for the night and Nanook stayed by her side. She rewarded Nanook with beef jerky, which he eagerly ate.

In the morning the pair went to cross the Eagle River at the ford site, but the cold swift water was too much for Milling. She decided to head down the river to find a better place to cross, which ended up being a mistake. Once she entered she realized the area was too deep and lost her footing.

She grabbed her pack and was floating on it down the river. Nanook immediately jumped in and grabbed the pack pulling her back to shore. She exited the river, but was wet and cold. She took out her sleeping bag and climbed in to warm up.


Nanook started to lick her face. She finally realized that she will not be able to get back on her own and needed help. She took out her tracking device and hit the SOS button. As soon as she did that, Nanook stopped licking her face and lied down.

Troopers noticed the tags on the dog and contacted his owner, Scott Swift. Swift said that Nanook saved another girl from the same river a few years ago. The dog likes to go on hikes and has helped countless hikers find their way back to the trail.


“This is the second time I’ve heard of he has saved someone from drowning in that river,” said Swift. What is even more amazing is that Nanook has no training in search and rescue. It is just his instincts. “He just does it on his own.”

Milling had some bruises but would make a full recovery. She plans to return to finish the hike, but with more company. She may even ask for Nanook to join her. She formed a bond with her rescuer. She says, “I believe the dog is a guardian angel. I told him several times that I love him and I’ll never forget him.”