Disasters test the mettle of those involved in them, as well as those observing them who try to help. Hurricane Harvey is no exception. People have been bringing their boats out to save families stranded on roofs. Thousands are donating time and money and even opening their homes for shelter to those in need. There is nothing that shows the strength of the human spirit more than a massive disaster. While there will surely be thousands of images of humans using refrigerators as boats to haul survivors, rescue workers saving lives, and more, humans aren’t the only ones affected. Animals are being displaced and lost as well. Thankfully, animals also have the unique ability to bring small spots of light into even the darkest situations.

Otis the golden retriever sparked an amused and hopeful reaction from residents in the Texas town of Sinton recently when he made a bold move during the hurricane. Otis was found carrying a bag of dog food home that had come from somewhere, although the mystery of where was never solved. Apparently Otis knew that food might be hard to come by and wanted to help his humans out. 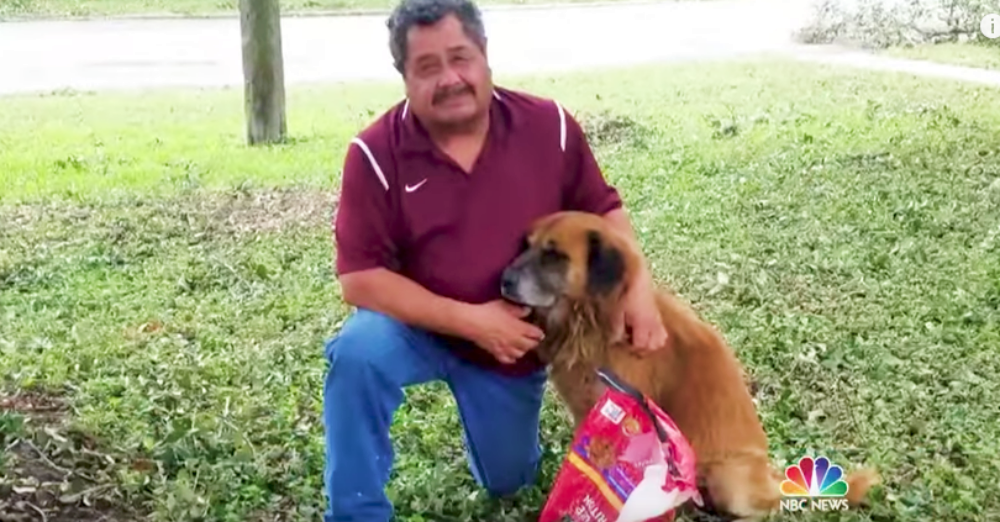 Otis had run off during the massive storm that swept through the Houston area over the weekend. He escaped from his family’s back porch and remained missing for around 4 hours before heading back with his newfound discovery, which he proudly showed off to his owner before plopping down to rest.

Despite the dire circumstances, Otis managed to put a hopeful smile on the faces of the Texas town trying to survive and repair their lives amid the storms that continue to pummel the area. Those moments of levity and relief from the horrors of the situation can’t be overstated. Through a single act, Otis helped inspire his neighbors and showed them exactly what they were working to save. Hopefully his journey will be remembered long afterward as a reminder of how much we need animals in our lives, especially during the worst times.

The aftermath of Harvey is still happening, with continued heavy rain and historical flooding. The need keeps growing, and we can all help save those in the direct path of this disaster.

Help Those Devastated By Hurricane Harvey! Hurricane Harvey, a category 4 storm, has made landfall in Texas with widespread flooding and sustained winds of up to 130 miles per hour. This is the first category 4 to hit the US mainland since 2004. The storm’s surge is expected to be life-threatening, with flooding lasting a week or more. We urgently need your help to assist people and pets in the storm’s path.
Help Save People And Pets During This Massive Disaster!
Make a difference!