One of the most horrific stories we have covered is the prolific theft, abuse, and slaughter of dogs and cats for meat. The dog meat trade in China, Korea, and Vietnam has sparked international outrage due to the cruelty practiced on helpless animals. More than two million dogs are killed each year for meat. The conditions the dogs destined for the meat trade live in are unspeakably cruel, with a lack of care and often terrible overcrowding. Worse, many of those who butcher or eat the meat believe that the adrenaline from fear makes the meat taste better, so dogs are tortured before being slaughtered, and that slaughter often takes place in front of other dogs.

It is an issue we have covered numerous times, and done our best to help stop with your help. Thankfully, the issue has become more and more public, and there has been a broader effort to help.

Enter Humane Society International. They have recently brought 250 dogs from a dog meat farm in Wonju, South Korea, where they were destined to be slaughtered, to America, where they can find forever homes and live in safety. The Humane Society Emergency Placement Partner program will help the rescued dogs find homes even faster. GreaterGood.org and The Animal Rescue Site also stepped in to help feed the rescued dogs, providing 600 meals of wet dog food. As the dogs recover at St. Hubert's Animal Welfare Center over the next 6-8 weeks, we'll continue to provide support.

As part of the rescue, the HSI was able to convince the farmer that raised the 250 dogs to leave the meat trade. He even signed a pledge to stop taking part in it, and will instead concentrate on turning his farm into a scrap metal business. It is the best outcome anyone could hope for.

Hopefully this is just the beginning, and more dogs will be rescued, allowing them to live a full life. Many organizations are still battling to stop the meat trade, and with the upcoming Yulin Dog Meat Festival, it is more important than ever to fight for those animals in need. Let's help save more lives!

Help Save Dogs From The Meat Trade! 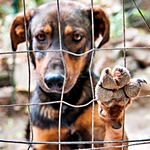 The meat trade in Asia kills millions of dogs each year for meat. These dogs face poor treatment, dehydration, and starvation which lead to rampant injury, disease, and death among the dogs. Rabies, cholera, E. Coli, and distemper are all spread by this brutal trade.

Help us stop this atrocious practice!