There is no way to have a humane bullfight. Horses and bulls are not aggressive animals, and forcing them to fight for their lives is not entertainment. Removing a horse’s senses and then sending them into the ring as a pawn is unacceptable.

A bull suffers immensely during a bullfight. The cruel attack and constant stabs lead to the imminent death of the bull. Once the bull is dead, he is dragged from the arena and sent to a slaughterhouse. An attack like this on an innocent animal is abuse and must end.

What is not well-known is how horses are abused and gored in bullfights. 200 horses are killed every year in bullfights. Horses are used by matadors to gain a height advantage over the bull and lower their risk of injury. Before the horse enters the arena, they are subjected to gruesome abuse. According to Last Chance For Animals, “The horses used in bullfighting are also routinely drugged. Workers typically stuff wet newspaper into their ears so that they will be unable to hear, and they are sometimes blindfolded to prevent them from running away. Their vocal cords are often cut so the crowd will not hear their screams.”


However, the torture is not over yet for the horse. The horse, with all senses removed, enters the arena to have a bull gore and charge it. The horse has no idea what is happening or when to expect a blow. If the horse is gored or injured, they are forced back on their feet to continue by whatever means necessary. A horse that is not killed in the bullfight suffers even more because he will be used again in another fight.

The horses that are typically used are old, loyal companions that can no longer work. Instead of enjoying the retirement that they deserve, they are abused and die a painful, agonizing death. Animal abuse is not entertainment!


“It is torture—not art or culture!” is the chant that animal activists chant when they protest at bullfights. The protests have increased as more people are against bullfights. Bullfighting has been banned all over Europe, as it is a gruesome and barbaric event.

We need your help to end this! Direct your anger and rage into a signature that can make a difference. Tell Spain to ban bullfighting! Please sign this petition and share with your friends.

Stop Horses From Being Victims Of Abuse And Torture In Bullfights! 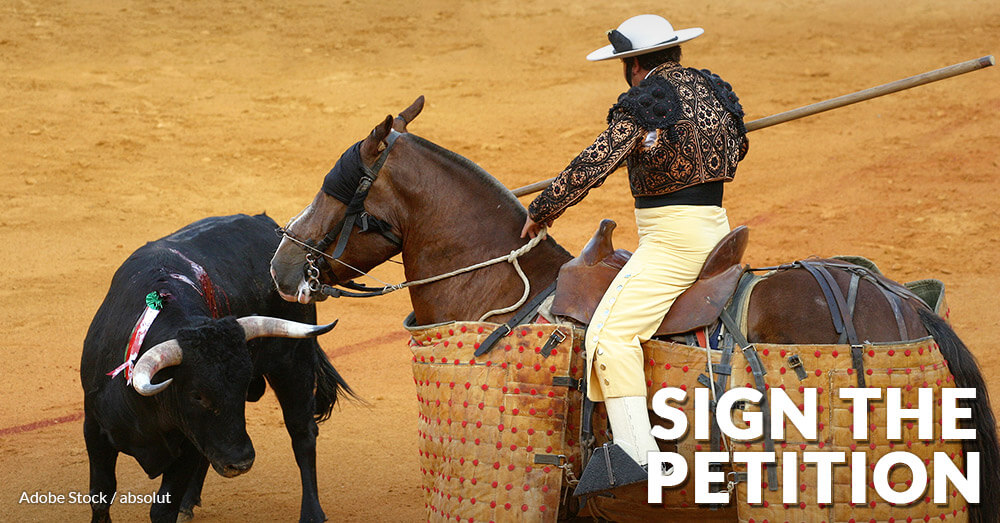 There’s no way to have a humane bull fight. The solution is to ban this cruel “entertainment” to save horses and bulls! 200 horses die every year after being gored by a bull. Hundreds more are injured and forced to re-enter the bull ring to face another bull. Those horses tremble with fear.
Tell the Prime Minister of Spain and Minister of Culture to ban bullfighting to save horses and bulls. Animal abuse is not entertainment!
Make a difference!