Last week, Japan was hit with torrential rains that caused widespread flooding and landslides. People were forced to evacuate areas and search for higher ground for safety. A miniature therapy horse and her colt were released by their caretakers in hopes they would swim to safety.

Leaf, a 9-year-old mare, and her colt, Earth lived at Life Town Mabi aged care facility in the Mabicho district of Kakehashi. She is a cherished therapy horse that is visited and fed by many people. As floodwaters rose, an evacuation was ordered for the facility. The horses were released and vanished into the rushing water. 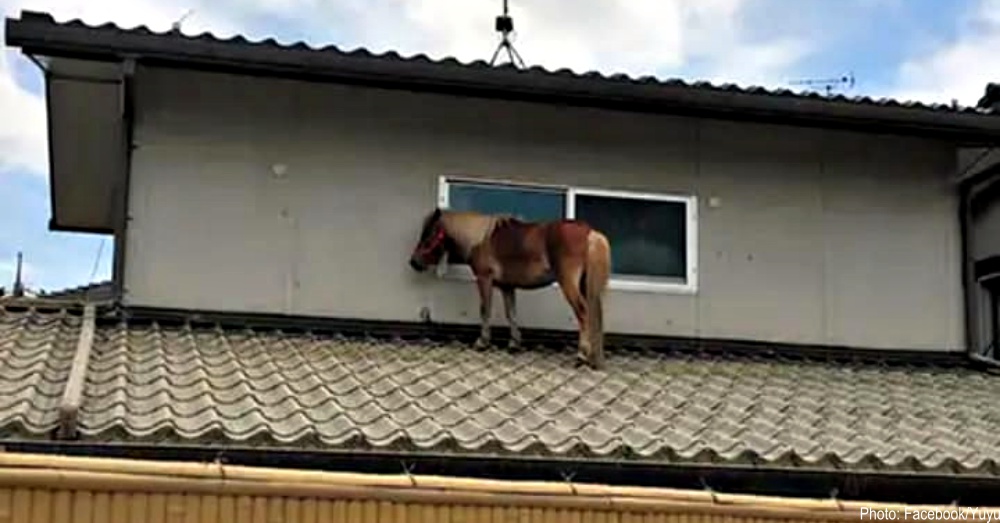 After the rain had subsided, rescue team set out to find missing people. One employee of Life Town Mabi refused to believe that Leaf and Earth perished in the flood. Mari Tanimoto, caretaker of Leaf, believed the horse swam to higher ground and was safe.

Well, she was right about Leaf. The tiny horse covered in mud was found on the rooftop of a private home three days after she was released. A rescue team from Peace Winds Japan were shocked when they looked up and saw the horse on the roof. The team was preparing to rescue Leaf, when she lost her footing and fell to the ground. Thankfully, she only suffered minor injuries and would be ok.


Tanimoto tells reporters at news.com.au, “I was really worried about Leaf because I could not search for her.”

Tanimoto and Leaf were finally reunited with tears of joy. It was a miracle she survived the flood. How the horse was able to get on the rooftop still baffles rescuers. The water never raised high enough for access to the roof.


Sadly, Earth was found dead by the same rescue team a few days later. Rest in peace, sweet colt. The floodwaters took the lives of over 170 people and many more animals.