A horse was dragged by a four-wheeler to the top of a mountain, and left there to die with no food or water. He was severely emaciated and could barely walk. He was covered in rain rot and was completely exhausted. Whoever left him there believed he was old and worth no value anymore. A man named Joey, and his girlfriend Coco, discovered the horse walking by himself. They saw he was in distress and in bad health, and knew they had to help him. Since the road was too dangerous to bring a horse trailer up and down the mountain, Coco walked with the horse for miles to bring him to safety. When the horse was too tired to walk any further, Coco didn’t give up. She did whatever it took to get Coco back down the mountain. 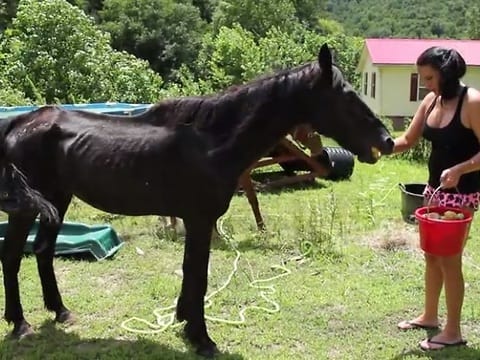 Once they brought him to safety, they took him in as their own and gave him all the love and care in the world. They fittingly named him Bones. They fed him, bathed him, medicated his wounds, and gave him a life he has never experienced. He also got treated by a veterinarian and got shoes for his uncared for hooves. Three weeks after his rescue, he was already looking much happier and healthier. He had other horse friends at his new home as well, and even doggy friends! He lived two and a half more years feeling the most love he’s ever felt. When he sadly passed away, he was laid to rest at his home. If he had stayed on that mountain, it could’ve been a matter of weeks or even days before he passed away. Instead, he got to live years in a happy and loving home. Thank God for people like Coco and Joey!