Heartless people no longer had a need for a sweet 12-year-old horse, so they arranged for the horse to be “euthanized”. However, the horse was not willing to give up and managed to save his own life with a daring escape or divine intervention.

Horses have an incredible survival instinct. The Alachua County Sheriff’s Office where shocked when they received a call about an injured horse that was found grazing on the side of the highway. 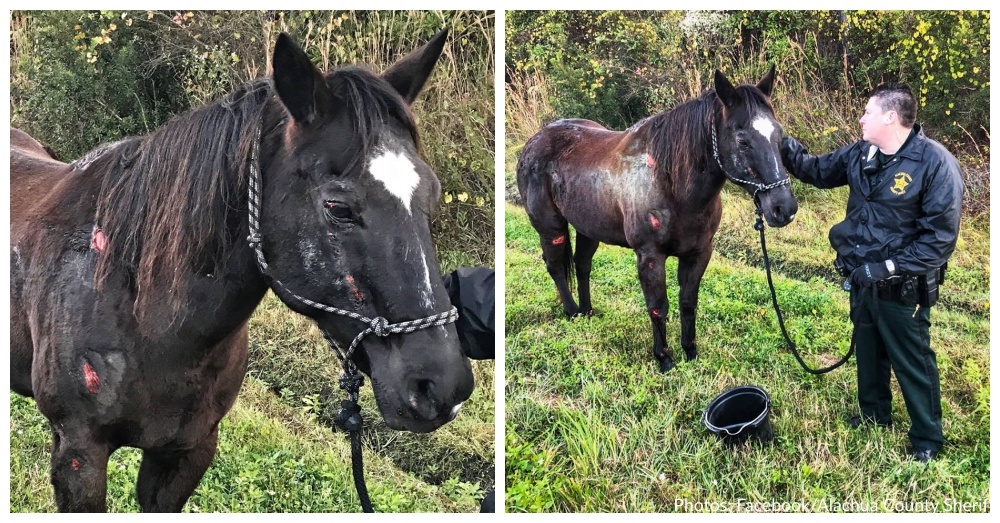 They were left baffled as to how and why the horse was next to the highway. Photos of the gelding were posted on social media that led to the horse’s story. People recognized the horse and provided police with information.

Art Forgey, a spokesperson for the sheriff’s office told Miami Herald that the previous owners no longer had a use for the gelding. The person that was transporting the horse to be “euthanized” had not properly secured the trailer gate, or the horse kicked his way out.

A truck driver recalled seeing a horse trailer with the gate open and flashed his lights at the driver. The driver pulled over and shut the gate, but seemed unconcerned about the missing horse. This happened in the middle of the night and police located the horse the following morning. The police are looking for the driver stating, “driver a suspect and is preparing a warrant for his arrest on animal abandonment charges.”

The officers nicknamed the horse Highway, but he was formerly known as Jet and Spartan by previous owners. Alachua County Sheriff posted, “We now know what happened to Highway. He’ll also answer to “Jet” and “Spartan” for those that know him, and he is still demanding carrots during his recovery.”


People who owned the sweet horse years ago were concerned about his welfare and reached out with information. The injured horse was brought to Springhill Equine Veterinary Clinic to be treated. He was in rough shape with large lacerations and road rash across his body. The departure from the moving trailer caused a lot of wounds but he escaped with his life.

It is unclear how Highway managed to escape, either he fell out or escaped on his own, but he is safe now. The medical team is doing everything they can to treat him and are overwhelmed with the support from the public. People from around the world are reaching out to checkin on the gelding and donating to help cover his medical costs. Each day Highway improves and that gives his rescuers hope.

“He still has a long road of recovery to go but with your help, he is well on his way,” posted staff at the clinic.
Highway underwent knee surgery for a joint wound, which he is slowly recovering from. Each day they post an update about Highway on their Facebook page. He loves to eat carrots and graze while he is showered with love from the staff. They even wrapped his wounded legs in festive wraps for the holiday. After he recovers, he will be put up for adoption.

“His story has certainly turned out to be one for the books.”