Every year the Humane Society of the United States releases a heartbreaking but important list. The HSUS’s list of the 100 worst puppy mills in the country is hard to read, but it is an invaluable tool in the fight against puppy mills.

There are countless reasons why puppy mills are horrific. Abuse, disgusting conditions, and the killing of dogs that don’t fit their standards are all rampant in the puppy mill world, and this has led to some of the worst stories we’ve seen. This list, while not comprehensive by any means, is a great start to ending the cruelty. 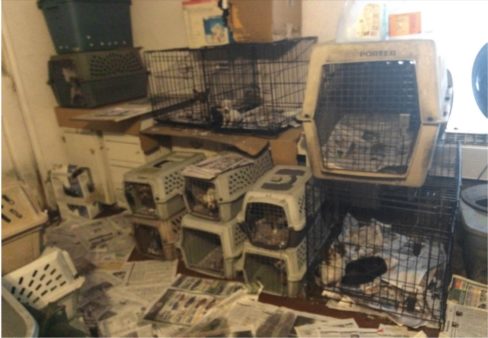 Linda Lynch was found operating an unlicensed facility in Texas. Inspectors found dogs in tiny cages, piled up and surrounded by clutter. It appeared the dogs barely had enough room to turn around. The facility is now state-licensed. (Texas Dept of Licensing and Regulation / November 2016).

HSUS faced a difficult challenge in compiling this year’s list due to the USDA’s decision to remove all welfare inspection reports from the USDA website in February of this year. Some of the statistics were restored in April, but “almost no records on pet breeding operations were restored.”

The full report is available here, and there is a lot to digest. Among the frightening statistics:

–This year, Missouri had the most dealers in our report for the fifth year in a row, with 19 dealers,
followed by a three-way tie among Ohio (12), Kansas (12) and Pennsylvania (12)

–45 dealers included are new to the report, and 55 are “repeat offenders” who have appeared in one
or more of our prior puppy mill reports.

–Researchers found at least nine dealers in this year’s report selling online on PuppyFind.com.
PuppyFind.com has repeatedly been linked to problem puppy mills

One of the most important pieces of information discovered this year was the inclusion of PuppyFind.com. Given the number of puppy mills selling through the site, and the utter lack of vetting it does, it’s vital people stay far away from it and direct others to avoid it when looking into getting a puppy. 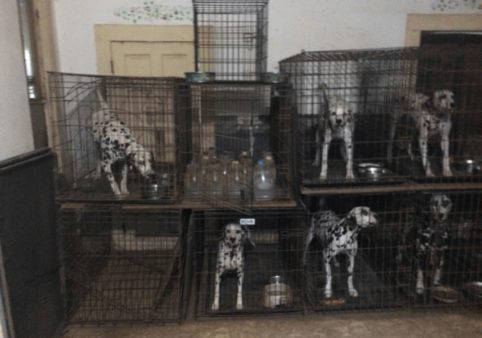 Jack and Dorothy Foreman were fined by the state after operating an unlicensed breeding facility. Dalmatians were found housed in stacked wire crates in dirty, cluttered rooms. The facility is now state-licensed.(Texas Dept of Licensing and Regulation, October 2015).

Thankfully the report isn’t all negative. In 2016, the USDA revoked the licenses of seven puppy mills that had been in past Horrible Hundred reports! While that number needs to increase dramatically, it is a testament to how important it is to raise awareness of the HSUS report.

The entire report is a difficult read, and it does contain some graphic images, but looking into your state’s puppy mills is crucial to ending this abuse once and for all.

If you know of a puppy mill in your area, you can submit a report with the Humane Society. Hopefully next year we’ll hear about dozens more horrific operations being shut down. Law enforcement does not have access to training to fight animal cruelty in many of their academies, or in service training. The Humane Society of the United States provides training for the information and techniques, making it accessible to all law enforcement in a given state, and does so at no cost. Law enforcement is given the task of protecting all of its beings, but without adequate training or equipment, animal protection laws are often neglected.