Hurricane Harvey has left thousands displaced and without homes since touching ground in southeast Texas in mid-August. It’s left massive amounts of wreckage in its wake, as well as at least six fatalities, and it has stranded both humans and animals in a flooded swath of the Lone Star State.

The storm was expected to last four to five days, Houston Mayor Sylvester Turner told residents, but the effects of the storm’s “epic and catastrophic” damage will undoubtedly last much longer, ABC News reports. Days on the road, lost jobs, hotel and lodging bills, fuel, and food expenses await those who decide not to check into the designated evacuation facilities like the George R. Brown Convention Center. And, once home, there’s the painful work of rebuilding a life out of what remains.

Emergency crews continue to evacuate humans and their pets from areas most affected by Harvey, but the work is tireless. Area shelters and even the 9-1-1 service in southeastern Texas have been inundated and unable to extend services to those not facing life-threatening situations. 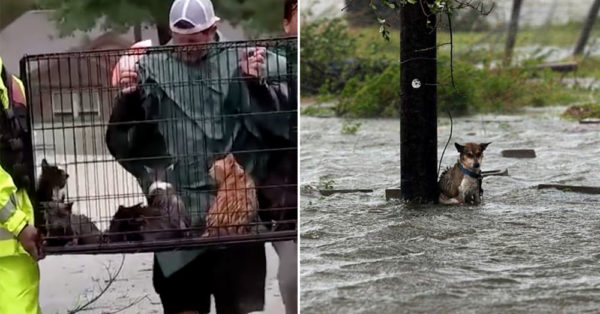 “Currently, our numbers have increased to 330 animals (169 dogs, 122 cats, and 40 more confirmed pets en route.)” Austin Pets Alive told ABC News on August 28. “Within the next 24 hours, those numbers are expected to increase by 50 to 110 animals, depending on how navigable some roads are. Our current projection is that we will have evacuated around 1,000 animals to Austin Pets Alive by the end of the week.”

The staggering loss of those most affected by the storm cannot be measured, but even the spirits of those who have survived Harvey might be eased by hearing of the inspiring rescues that have taken place. A number of uplifting stories from the storm have emerged as the waters recede.

Here are some of the most heart-wrenching rescues from Hurricane Harvey:

Perhaps he understood the urgency of the situation, or perhaps he’s just falling back on old habits, but the image of a German shepherd mix named Otis carrying a bag of dog food across the flooded streets of Sinton, Texas, has been shared thousands of times since it was first posted.

The Animal Rescue Site published an account of Otis’s story on Monday. According to the dog’s owners, he’s been known to filch food and other items in the past. Otis’s preparedness may have little to do with the extreme weather, it seems.

According to National Geographic, it’s not uncommon for dogs and cats to try to escape during extreme weather events. But what happens when the pets are still tied up?

While owners hoping to keep their pets safe may think that securing them somewhere at home is the best course of action, it’s actually putting the animals in harm’s way.

A photographer who came across a dog chained to a telephone pole in Victoria, Texas, was kind enough to free the animal to escape the rising waters, already 10 inches deep. Unfortunately, not all animals are so lucky.