For eight days, a 3-year-old pit bull waited for his owners to return to the Kansas City, Missouri garbage dump where they left him. Cold and hungry, he waited in vain — they never came back. But this heartbreaking story had an unexpectedly quick and happy ending.Hidden cameras installed at the garbage dump to monitor illegal dumping captured footage of the dog, later named Mojave, being pushed out of his owner's vehicle. As the car drove away, Mojave chased after it until he was too tired to run. Then he returned to the dump and waited. He waited for more than a week. 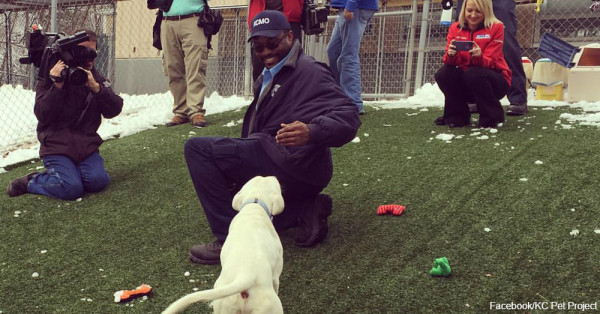 Eight days later, city codes enforcement inspector Alan Ashurst was monitoring the cameras and was shocked to discover the surveillance footage of Mojave's abandonment. “When I saw the pictures, I went into a little rage blackout,” he told reporters. Ashurst notified animal control officer Eron Dawkins and together they enticed Mojave with food and caught him.

Mojave was then turned over to the KC Pet Project for care. There, he was immediately seen by a young couple who knew nothing of his story, but fell in love with him. After only 30 minutes, Mojave got a new home.

Using the license plate number captured on surveillance footage, city officials tracked down the dog's former owner and charged him with four crimes including animal abandonment, allowing a dog to run at large, failure to have a pet license and failure to have the pit bull neutered, which is a city ordinance. A representative from the KC Pet Project said that although it's often difficult to prosecute animal abandonment cases, the photos in this case will probably make a difference. If you need to give up a pet that you can't care for anymore, check with your local animal shelter. Many of them, like the KC Pet Project, offer pet relinquishment programs that will find a good home for the animal. It's a lot less expensive than the fines Mojave's former owner will have to pay. Learn more about how animals end up in shelters and how you can help.