Happy the elephant has lived in captivity almost her entire life.

According to the Associated Press, Happy was captured when she was just 5 years old, and has spent the last 45 as a resident of the Bronx zoo.

Happy has been the sole inhabitant of her “1-acre prison” for the last 13 years in the zoo, a facility that was named America’s fifth worst zoo for elephants in 2021, In Defense of Animals reports.

According to standards set by the Association of Zoos and Aquariums, each zoo with elephants must have a minimum of three females (or the space to have three females), two males, or three elephants of mixed gender. Bronx Zoo fails to meet these bare-minimum requirements for elephant wellbeing.

Like many elephants, Happy is an intelligent and understanding animal. In 2005, she passed a mirror test, showing self-awareness by recognizing her own reflection, the Washington Post reports.

In the last two decades scientists have found that elephants are even smarter than we previously thought. According to Scientific American studies have shown that elephants are adept tool users and cooperative problem solvers; they are highly empathic, comforting one another when upset; and likely have a sense of self.

The Nonhuman Rights Project maintains that because of her advanced intelligence, Happy should not be from imprisoned against her will. The argument that an elephant deserves the same rights as a human has little precedent, though the definition of personhood under U.S. law has been debated since the founding of the country, The Atlantic reports.

“She has an interest in exercising her choices and deciding who she wants to be with, and where to go, and what to do, and what to eat, and the zoo is prohibiting her from making any of those choices herself,” said an attorney for Happy.

The Nonhuman Rights Project is now fighting for Happy’s freedom, taking her case to New York’s highest court to demand that the Bronx Zoo release Happy to an elephant sanctuary, the Washington Post reports.

Click below and help us ask the Bronx Zoo to release Happy to an elephant sanctuary to live out the rest of her life in peace! 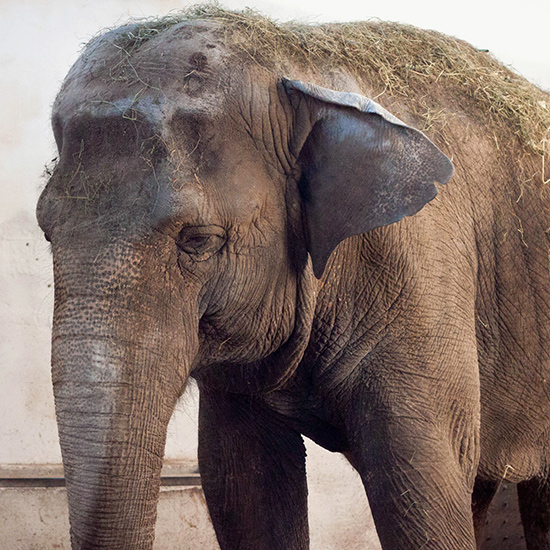 Happy has spent the last 45 years of her life at the Bronx zoo, which has repeatedly failed to meet the AZA’a bare-minimum requirements for elephant wellbeing.

Elephants are social creatures that need freedom and connection with other elephants to thrive.

Help us ask the Bronx Zoo to give Happy her freedom!