Groupon makes its money by bringing business to companies who in turn offer discounted deals to customers. Services companies like restaurants, gyms, and hotels can benefit from this relationship, but

Among other companies, Groupon has sold deals for:

Groupon has worked with some of the most infamous wildlife exploiters in the United States, including the Garold Wayne Interactive Zoological Park (G.W. Exotic), the facility owned by “Tiger King” Joe Maldonado, as well as multiple circuses that used elephants in dangerous and harmful performances such as Ringling Bros. and Barnum & Bailey Circus.

As the World Society for the Protection of Animals reports, venues that offer interactions with captive wild animals may call them “experiences,” “encounters,” or “meet-and-greets.” These facilities may hold a range of wild animals in interactions, but nonhuman primates, elephants, dolphins, alligators, and big cats feature prominently.

Many times, to enable these types of interactions, animals are restrained, coerced through abusive training, or enclosed in such a small space that they do not have a choice about whether to participate, National Geographic reports.

The fact is, forcing wild animals to engage with humans, stripping them of their freedom, can be highly stressful and causes suffering. For some species, such as big cats and alligators, venues must maintain a reliable stream of babies that they can use in interactions, discarding, selling, or even killing those that are no longer profitable.

These interactions can be extremely dangerous for both animals and humans yet they are often promoted to young children.

The temporary nature of Groupon deals means that venues and offers are always changing, but Groupon still takes a percentage of every discounted deals sold on its website, whether to an ice cream shop or a roadside zoo. By refusing to profit from or partner with companies that offer interactions with wild animals and/or captive wild animal performances, Groupon could help reduce the suffering of countless animals.

Help us ask Groupon to stop profiting from wild animal suffering and adopt a public animal welfare policy that protects animals and doesn’t exploit them.

Stop Groupon From Profiting Off Exploitation 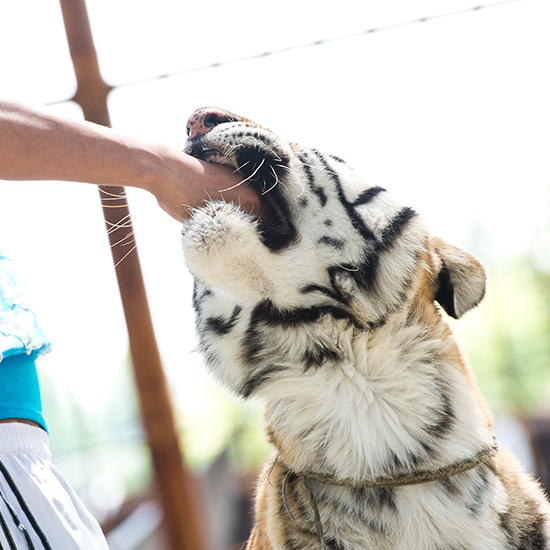 Groupon partners with businesses that exploit wild animals for tourist entertainment and profit.

Forcing wild animals to engage with humans, stripping them of their freedom, can be highly stressful and causes suffering.

These interactions can be extremely dangerous for both animals and humans yet they are often promoted to young children.

Sign the petition and ask Groupon to stop profiting from wild animal suffering!