Life is tough on orphaned kittens, who face myriad risks without their mother’s protection. This became clear when an orphaned kitten wandered onto a busy street in Houston. As the tiny kitten’s black fur camouflaged into the night, it seemed all but certain the defenseless newborn would be killed by traffic.

“Being so small and dark in color, it’s a miracle that this tiny kitten was not hit by a car,” rescuers told Greater Good Charities. “But on that fateful night, a driver saw him and swerved just in time to spare his life.”

After watching this heart-stopping scene unfold, another driver jumped out of her car to rescue the kitten, who was sitting stunned and motionless in the street. “She scooped up the little life and became determined to keep it safe,” shelter workers said.

But while the kitten was momentarily safe, the youngster (who was later named Fritz) remained in great danger. Newborn kittens need milk every couple of hours, but the mama cat was nowhere to be found. Nor could the woman just buy kitten formula, because the pet stores were closed.

“She looked around the area for a momma cat or other kittens, but seeing none, she knew this would now fall to her,” shelter workers said of Fritz’s rescuer. “But where does someone find kitten formula at ten o’clock at night?”

Thankfully, the woman managed to contact Houston PetSet, a non-profit rescue committed to helping Houston’s booming population of homeless animals. Despite the late hour, the shelter had nursing bottles and kitten formula from Greater Good Charities, which teamed up with the Animal Rescue Site to provide critical supplies that help orphaned newborn kittens survive in the shelter.

This life-saving donation–made possible through your daily clicks, donations, and shopping at The Animal Rescue Site Store—allowed little Fritz to begin bottle feeding, thus saving the kitten’s life for the second time that night.

“We’ve received feedback that this year more than any other, more emergencies are happening late at night after traditional pet stores have closed,” Houston PetSet told Greater Good Charities. “Having these supplies on hand has been invaluable in giving [shelter volunteers] flexibility to respond to urgent requests which they may otherwise have needed to decline.

Nor was Fritz, who thrived in foster care and is almost ready for adoption, the only homeless animal to benefit from your generous donation, which was gratefully received by shelter workers during the twin crisis of Covid and kitten season.

Your donation also helped Paige, a pregnant stray rescued from Houston’s streets after a concerned resident noticed the stray dog was pregnant, starving, and covered in mange. “Her skin was red and irritated, with sores and patches of hair missing all over her body,” shelter workers told Greater Good Charities. “But this wasn’t Paige’s only health concern, she also appeared to be ready to give birth.”

This good Samaritan brought the dog to a local shelter, where a rescue group stepped in to help the ailing mother dog deliver her puppies. “She was in luck, and a rescue group and foster stepped up to provide the love and comfort she needed to deliver her babies,” workers recalled. “In a matter of days, Paige’s puppies arrived one by one until there were eight hungry mouths to feed.

But for a sick, malnourished dog like Paige, a large litter is more of a curse than a blessing. At first, Paige produced enough milk for her puppies, but then the long-neglected dog’s health began to spiral.

“Upon advice from the veterinarian, the puppies began receiving some formula to supplement Paige’s milk and give the new mom a break,” shelter workers said. But while Greater Good’s donation of kitten/puppy formula helped save Paige’s puppies, it was too late for the ailing mama dog.

“Paige’s health continued to decline, and she was rushed to the emergency room to receive care,” shelter workers said. “In the meantime, the eight puppies switched fully to the generously-donated formula to sustain their fragile lives.”

Once they started bottle-feeding, Paige’s puppies grew stronger, energetic, and more playful each day. Within months, the young litter was healthy, vaccinated, and transported to Colorado, where all 8 puppies were quickly adopted.

But the poor mother dog wasn’t as lucky. “Despite their best efforts at the emergency room, Paige’s many years of neglect were too much for her to overcome,” shelter workers said sadly. Even so, caretakers are heartened knowing Paige got to experience love and care in her final days.

“Although she died, there is some comfort in knowing at the end she was able to receive the love she deserved all along,” shelter workers said. “She could leave knowing her puppies would have the life she never could.”

Please make a donation if you’d like to help us send life-saving formula, bottles, and critical supplies for other shelter animals. Thanks for giving orphaned kittens and puppies the chance to live a long and healthy life! 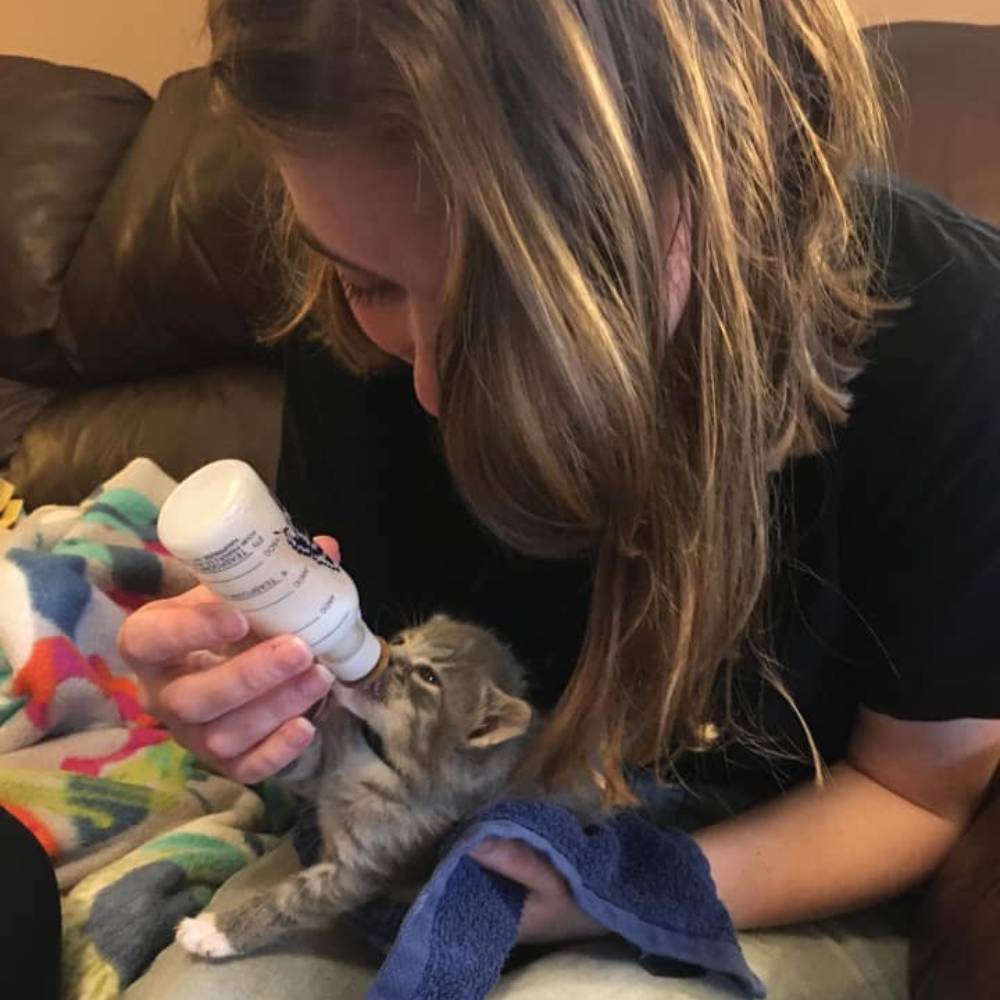 Provide formula, medical supplies and ongoing support to orphaned kittens and puppies in need. Click to make a difference!