If we’re all being honest, we don’t always share every detail about our health with our physicians when we have appointments.

We stretch the truth a little. Our exercise habits, our drinking habits, our eating habits – the facts can be fudged a little bit in order to avoid a lecture or medical advice that we don’t want to hear. If we have a specific concern, we are much more likely to be forthcoming, but when it comes to stuff we don’t deem important, we let things slide.

So it makes sense, to a certain extent, that the same would hold true for vet visits. But the information you provide for your animal – since they obviously can’t speak for themselves – can have a huge impact. It’s important to be honest and open with the vet because they are asking the questions they do for a reason, and it will only benefit everyone in the room.

Veterinarian Lisa Schroeder found herself in a difficult and dangerous situation when pet owners withheld information from her during a visit.

When they brought in their 94-pound dog in for an issue, Schroeder first asked if he was a friendly dog. They nodded their head yes. 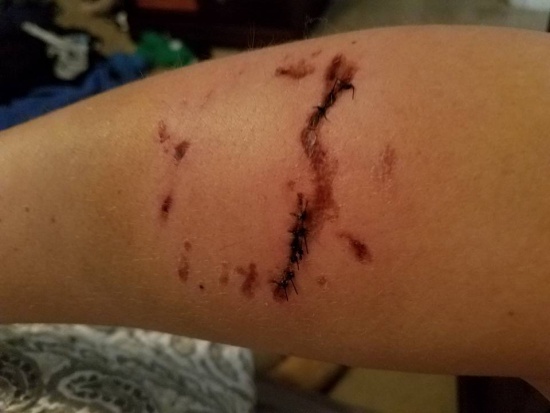 She knelt down to inspect the dog, and saw he had a rising heart rate. She started to get a sinking feeling in her gut. The owner spoke up then, saying, “He does have a temper sometimes.”

Then the unthinkable happened.

“As I started to back away from the dog, he lunged at me, biting into my forearm,” Schroeder wrote in a now viral Facebook post. “Not only did he hold on, but he started jerking on my arm, as well, while the owner pulled on his retractable leash to get him off. When he let go, I was able to crawl into the corner of the room, all the while, the dog still barking and lunging at me.”

When the owners finally managed to get the dog away from her and out of the room, Schroeder notified her boss. He is also an EMT (thank goodness!), so he bandaged her up quickly before sending her to the emergency room at the hospital.

Schroeder had an x-ray done to see if any teeth were embedded in her arm. Then she was given nine stitches.

A severe winter storm kept her stuck at the office for two days afterward.

“Every time I laid down to rest between shifts, I spent a good 20 minutes thinking about a huge dog with my arm in his mouth, and my boss cleaning pieces of my flesh off my shirt sleeve so I didn’t have see it while I rode to the hospital,” she wrote in her post.

Schroeder loves her job, like many veterinarians do, but she needs to be safe while doing her job and helping others with their pets. She wants all pet owners to do this one thing when they visit the vet: be honest about your animal’s behavior.

“If your dog has a history of snapping, biting or even being kind of sketchy at the vet’s office, you need to be honest and up front about it,” she said. “You have to give me a chance to keep myself safe.”

Schroeder was in the Army, and spent time in a combat zone — but she says that this dog attack was the most frightening encounter she has ever had in her life.