For many of us, our pets are family. But because our pets have such a short life compared to ours, that means we experience deep sadness and loss when they pass away.

Saying goodbye to our pets at some point is unavoidable. We’ll say goodbye to many pets over the course of our lives — and it doesn’t get any easier.

Sometimes our pets pass on their own, due to accident or illness. But sometimes they reach a point where they are so elderly or ill that their quality of life is gone, but they’re still hanging on.

In order to ease their pain and suffering, we have to make the tough decision to take them to the vet to be put down, so that their end-of-life experience can be as pain-free and comfortable as possible.

If you’ve never had to take that step with a pet before, you may wonder what it’s like for them to be in that room. Twitter user Jessi Dietrich wondered this very thing, and asked her vet what it was like.

The vet the answer gave her was devastating.

“Asked my vet what the hardest part was about his job &he said when he has to put an animal down 90% of owners don’t actually want to be in the room when he injects them so the animal’s last moments are usually them frantically looking around for their owners & [to be honest] that broke me,” she wrote.

“And for this reason I’m literally gonna be cradling my homeboy rick when his time comes with all his favorite (sic) toys and endless ear scratches at the ready regardless of how distraught I am,” she followed up.

She got a lot of responses to her tweet. Other people wanted to share their own experiences of what it was like having their pet put to sleep.

“I work as a tech at a vet clinic. I’d say 80% of owners want to be there! But we give them an injection to make them sleepy first (basically surgically anesthetized) so the transition is that much smoother,” one person said.

“And when owners don’t want to be apart of the actual euthanasia, they stay for the sedation part so at least they are with them until they are sleeping. Makes everything so peaceful (well as peaceful as that can be I guess).”

Another person wrote: “I don’t care how hard it is, I was literally bawling my eyes out and still made sure to hold my cat while they injected her both times. One a pain killer and then the one to put her to sleep. I could NEVER leave my family to die alone.”

“Oh my god, I could never do that!” One person said. “When we put my dog down after he got cancer, I looked right into his face, doing my best to hold in my emotions, so he knew I was there. If I end up having to put my cat to sleep, I’ll do the exact same thing.”

Hillcrest Veterinary Hospital, which is a clinic in KwaZulu-Natal, South Africa, posted something similar on Facebook. 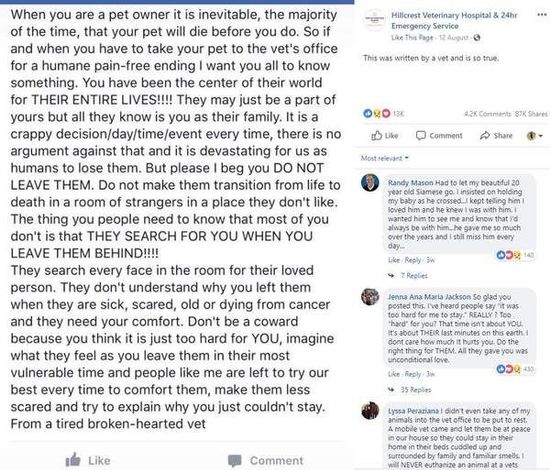 They begged pet owners to stay with their animal for the last moments of their lives.

The post, written by a “tired broken-hearted vet,” said: “I beg you DO NOT LEAVE THEM. Do not make them transition from life to death in a room of strangers in a place they don’t like. The thing people need to know that most of you don’t is that THEY SEARCH FOR YOU WHEN YOU LEAVE THEM BEHIND!!!!!

“They search every face in the room for their beloved person. They don’t understand why you left them when they are sick, scared, old or dying from cancer and they need your comfort.”

The also said that that a pet owner shouldn’t be a “coward” and should comfort their pets in their final time of need.

Dr. Lauren Bugeja, a Melbourne veterinarian, said that she travels to the family’s home to euthanize their pets there.

“If a pet is getting left alone in an unfamiliar environment like a vet clinic or consult room, then they would be more likely to be worried as they do not know where they are,” Bugeja said.

“For this reason, I would recommend staying in the room with your pet if you choose to do it at a clinic.”

Once the time comes, however, some pet owners do need to leave the room because they are so distraught — and Bugeja says that she would never pressure an owner to stay with their pet because it can cause them great emotional harm.

In the case that an owner does have to leave the room, she and her nurse comfort the animal in their final moments.

The loss of a pet can be one of the toughest things we go through. Our hearts go out to anyone who has to experience saying goodbye to their best friend.