Officer Sylvia Coelho, Frida’s rescuer, has adopted Frida. Dozens of people came forward claiming to be Frida’s family. However, Frida would not respond to any of the “owners,” and was kept in the shelter. After a few days of unsuccessful searching, Officer Coelho decided to bring home the dog that she had become so strongly bonded with.

This amazing story has the happiest ending it could, and we are so grateful to Officer Coelho for her hard work and her adoption!

“Freeway Frida,” the German shepherd who spent 5 weeks living on a highway median in Galt, Calif., has been saved by local police and taken to a veterinary clinic where she is now recovering. 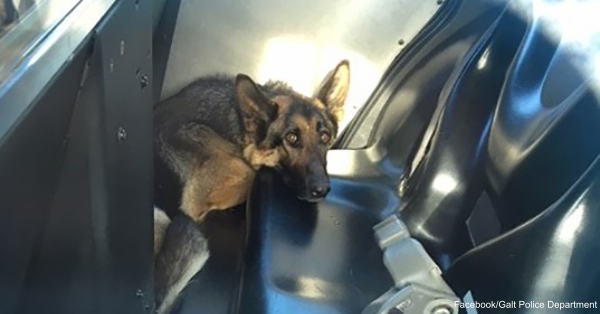 Frida fell off a truck on Highway 99 on April 10, and her owners, likely not realizing she had fallen, continued on. Prompted by several 911 calls, Galt police searched the area for Frida but could not find her.

“People have been calling the police department reporting that they keep seeing this dog, but every time we’re out there, we can never find the dog,” said Galt police officer Sylvia Coelho. “Last week, when we stopped getting calls, I thought something happened, she, you know, died.”

So when another call came in early morning, May 14, Coehlo was quick to respond.

And get her they did.

“With the help and assistance of CHP, who were awesome to assist us, we were able to catch her finally after almost five weeks of being in the median,” Coelho said. “Once CHP was able to get the snare on her, she fought a little bit, but then she subsided and just laid down, and those big brown eyes were looking up at us like ‘please help me.’”

During the 5 weeks Frida spent on Highway 99, her weight dropped to 45 pounds, well under the 65-pound average for healthy German shepherds. Dr. Mike Johnson, a veterinarian at the VCA Bradshaw Animal Hospital in Elk Grove, Calif., where Frida is being treated, speculated that Frida may have been living on little more than runoff rainwater.

On Monday, May 16, Officer Coelho visited Frida at the Bradshaw VCA and was pleased with her recovery. The Galt Police Department is still searching for Frida’s owners, but for now they are excited she is safe and getting her strength back.

“It made our day,” Coelho said. “The whole day we were just all smiles and so happy.”

While Frida recovers, many of her canine brothers and sisters forced into dogfighting rings will find a less fortunate fate this year, particularly in North Dakota, where animal abuse is not regularly prosecuted. North Dakota is a state in which livestock and agriculture play a huge part, so it’s vital that the state strengthen its animal welfare laws to protect against farm animal and pet abuse. By signing this petition, you can urge Governor Jack Dalrymple to start protecting North Dakota’s animals!