Pit bulls are often overlooked at shelters because they are perceived as mean or vicious. However, people are missing out on loyal and loving companions. One woman decided that she wanted to rescue a pit bull from a shelter that no one else wanted.

The perfect dog was a black pit bull with cut ears and covered in punctures from dog fighting. The stand off dog was rescued from a violent life of dog fighting. GinaMarie knew the moment she met Felon that he was the dog for her. Felon was about to be put down, but he was rescued from Fulton County Animal Shelter just in time. 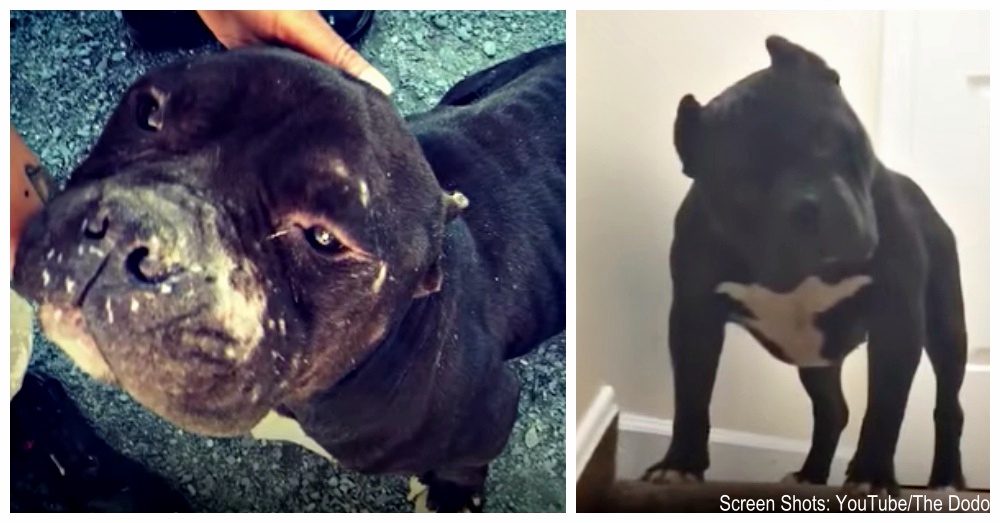 The moment Felon arrived at his new home, he went into the bedroom and hid in a corner. His spirit and trust in humans was broken. Everyday his new mom would try to approach and comfort him, but he would growl and remain in the corner. She refused to give up and giving him back was not an option.


After feeling defeated and heartbroken, GinaMarie took a new approach to help Felon come out of his shell. “The physical can heal. The emotional is the hardest to get through,” states his mom. She called her dad and asked him to bring his senior dog over. The moment the senior dog walked through the door, Felon “lit up”. He left his corner and immediately went on his first walk.

“Ok, well, if there needs to be another dog around, then maybe I need to rescue another one,” GinaMarie tells The DoDo. So GinaMarie and Felon headed to the shelter to see which dog Felon would connect with. Located in the last kennel was his new best friend, Envy.


“There was an instant connection.” The two took off running and playing like they were old friends. Envy offered Felon the connection and friendship he needed to leave his hurtful past behind. She taught him how to play and trust people.

Fast forward two years and Felon is a happy dog that is living life to the fullest. “For me, they are everything. They give me a purpose to wake up every morning.”

Watch Felon’s full transformation in the video below.