Nemo A534, a German Shepherd, served with the Air Force in the Vietnam War. While on guard duty one night with his handler, Airman Robert Throneburg, Nemo sensed enemy soldiers approaching and alerted Throneburg. Thanks to Nemo’s alert, Throneburg was not taken by surprise and the two were able to put up a valiant fight. 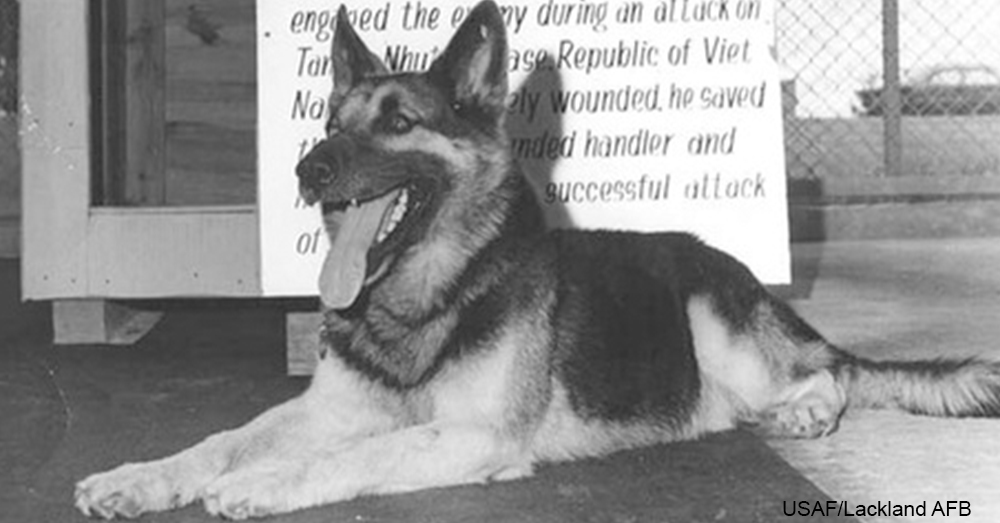 Both Nemo and his handler were shot during the fight with the Viet Cong guerillas, Throneburg in the chest and Nemo in the nose and eye. Despite the gunshot wound, Nemo helped keep the attackers at bay long enough for Throneburg to radio for help. When Throneburg fell unconscious from his wounds, Nemo guarded his wounded handler from attacking forces until help arrived. In fact, Nemo was so protective of his handler that he wouldn’t let anyone near him – friend or foe – and it eventually took a veterinarian to get Nemo to move so that medics could treat them. Both recovered from their injuries. Throneburg received a Puprle Heart and a Bronze Star Medal with Valor and Nemo was given a permanent kennel to retire. He was one of the first dogs allowed to return to the United States after serving overseas since World War II.

Modern day U.S. military dogs are used primarily for sniffing out and detecting hidden or buried explosives (IEDs) in the Middle East. One modern military dog in particular, Cairo, has the unique distinction of being the only military personnel named from Operation Neptune Spear – the covert military operation that took down Osama Bin Laden. 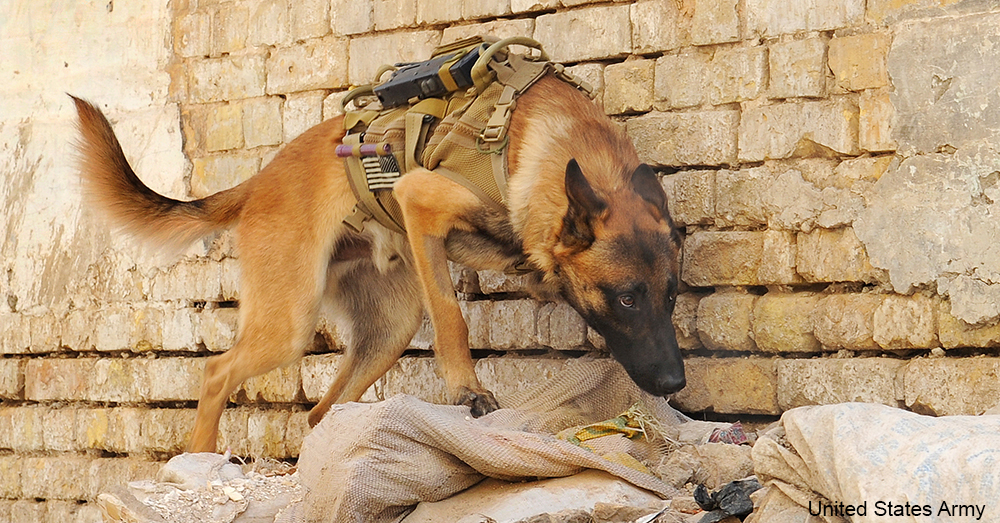 Cairo is a Belgian Malinois and a canine member of the elite Navy SEALs. Cairo was part of the Navy SEAL team that stormed Osama Bin Laden’s compound in May of 2011 in Pakistan. Cairo helped secure the outside perimeter of the building and was tasked with tracking down anyone who tried to escape, as well as being an alert of any incoming interference. He was outfitted with a special vest that included tactical equipment. Though little is known about the exact actions of Cairo during the operation, he was the only military dog to be part of one of the biggest military operations in modern history.

In 2012, Lucca was on her second tour in Afghanistan when she saved the lives of several Marines – but at a price. After finding one buried explosive, Lucca began the search for a second device in the area. An IED was set off, with Lucca taking the brunt of the explosion. Her handler at the time, Cpl. Juan Rodriguez, immediately applied a tourniquet to her front leg, and later stayed with her during her recovery. Unfortunately, Lucca’s leg had to be amputated due to the injury. That didn’t affect Lucca much, according to Rodriguez, who says she almost immediately wanted to get back up and start walking. She was granted the Dickin Medal by the PDSA and was (unofficially) granted a Purple Heart by a fellow Marine who had also received the medal.

Watch Lucca’s full story in the video below!

If you loved the stories of these amazing military working dogs, click the link below for more ways to support K-9 veterans and animal rescue shelters.