Service dogs provide essential support so that people with disabilities can go about their daily lives, and they get many legal protections as a result. Unfortunately, some unscrupulous people take advantage of those laws to bring their pets into places where dogs normally are not allowed, such as stores and airplanes. A new Virginia law aims to stop that behavior by making it a crime. The law, which went in to effect in July 2016, was inspired by journalist Marty van Duyne. 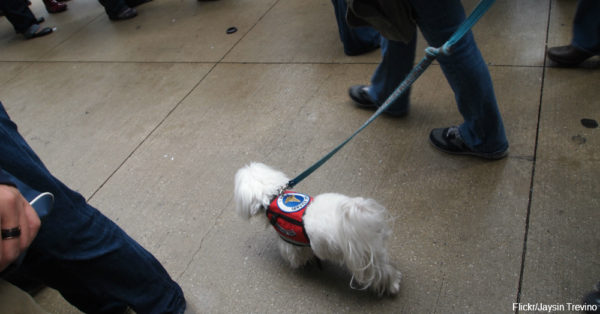 The Virginia resident uses a service dog, but her helper had recently passed away. She was preparing to attend an event when another attendee asked her to bring along her dog’s service vest, which she assumed was for educational purposes. She was shocked to discover that the person had hoped to use the vest to sneak a different dog into the event by pretending it was a service dog. 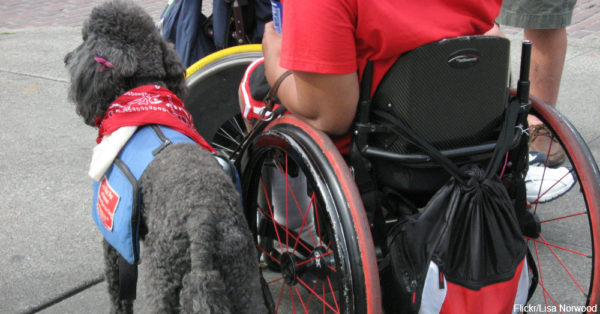 Those with invisible disabilities, such as post-traumatic stress disorder or epilepsy, may be particularly affected, as the general public sometimes assumes that they are faking. In some incidents, fake service dogs have attacked real ones, which can cause long-lasting training and health problems for the real service animal.

Van Duyne wrote to Virginia state Senator Bryce Reeves, who had previously passed laws supporting service dogs. Reeves sponsored the new law, which makes it a fourth-degree misdemeanor to use a fake service dog vest or otherwise fraudulently attempt to pass a pet off as a service animal. Breaking the law can result in a fine of up to $250. Proponents acknowledge that the law is difficult to enforce, but they hope it may have a deterrent effect. Fake service dogs undermine the important work that real assistance animals do, and this law may be a step towards combating that problem. Meet a service dog whose bond with his young owner is so strong that he got his own spot in the yearbook.