BREAKING NEWS: Evanger’s has issued a voluntary recall on five lots of its Hunk of Beef Au Jus products.

The recall was prompted by reports of the death of one dog and the sudden illness of four others in a Washougal, Wash., woman’s home, after eating the food on Dec. 31, 2016. Nikki Mael told Katu that her dogs began acting strangely within 15 minutes of eating the Evanger’s product.

“They were falling over. So I grabbed them all and took them to the emergency vet. And when they got there, they were just limp. They weren’t moving or anything. And so they were in ICU. Tito and Talula ate the most [food] and Talula passed away,” Mael said.

During a four-week investigation into the case, Evanger’s found that one of its major beef suppliers had given them meat possibly contaminated with pentobarbital, a controlled substance more commonly used to treat anxiety and insomnia.

“Immediately upon learning that dogs became sick on New Years’ Eve, we launched an investigation immediately. The investigation continued for nearly four weeks, including obtaining samples of the same lot fed from the field and having them sent to an independent accredited laboratory to test for any toxin or bacteria we could possibly imagine,” Evanger’s posted on February 3. “All of those tests came back negative. It was not until January 29th that we learned about the term, ‘pentobarbital.'”

Evanger’s claims it has since broken off any business relationship with the supplier at fault.

“We feel that we have been let down by our supplier, and in reference to the possible presence of pentobarbital, we have let down our customers,” the company posted. “Despite having a relationship for forty years with the supplier of this specific beef, who also services many other pet food companies, we have terminated our relationship with them and will no longer purchase their beef for use in our Hunk of Beef product. As Hunk of Beef is a very unique product, requiring very specific cuts of meat, this supplier’s meat was used in no other products.”

While the first round of biological testing on the food has produced negative results, Evanger’s maintains, the company is still offering to pay all of Mael’s veterinary expenses. 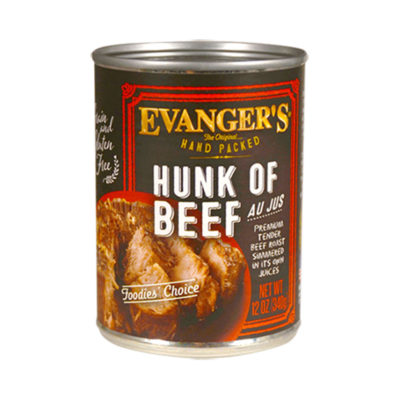 The second half of the barcode on the back of the can reads: 20109

The FDA states that all Evanger’s suppliers of meat products are USDA approved, as were the facilities that produced the beef supplied to the dog food company.

“We continue to investigate how this substance entered our raw material supply,” Evanger’s communicated to the FDA on Feb. 3. “This is the first recall for Evanger’s in its 82 years of manufacturing.”

Little to no remaining cans of Evanger’s Hunk of Beef Au Jus product remains on store shelves, but those who have cans with the named lot numbers should return them for a full refund.

The rate of recalls keeps increasing, and we can’t allow companies to keep putting our loved ones in danger!