Army Reserve Sergeant Tracy McKithern never expected to save the life of a dog while deployed in Iraq. Fate had other plans that would involve the two meeting and becoming inseparable.

The two first met outside the base where McKithern was stationed in Iraq. She came across this puppy who was starving and looking for love. Sgt. McKithern, a dog lover, immediately connected with the puppy. She decided to name her Erby Kasima. Erby after a nothern city in Iraq and Kasima means “beauty” in Arabic.


Everyone at the base fed and played with Erby. McKithern posted on social media that she would love to take this puppy home. This initiated the research by her friends and family to find a way to make it happen. Puppy Rescue Mission responded and helped with the lengthy process of bringing Erby home to the United States. With generous donations from GreaterGood.org and people all over the world, Erby was flown home.

“Erby is a stray who is estimated to be about four months old. She lives at Kurdistan Training Coordination Center (KTCC), near Erbil, Iraq. Erby is an adorable puppy who loves people, children and all animals that reside with her. The training facility is often full of soldiers from Germany, Italy, Britain, Sweden and Finland. She meets our convoys regularly, racing frantically, with her clumsy long legs often tripping on the way. She makes us all smile and laugh. As military members, we are often instructed not to touch or feed stray animals. Well, she receives a lot of love, hugs, pets, belly scratches and a lot of food and snacks.


She recently survived a sandstorm and eagerly awaited me to exit a building. For all intents and purposes, she is already luckier than most stray dogs in this country, but two of her siblings have disappeared. I would like to keep her safe and give her a permanent home with my small family. I want to continue to spoil her with love, medical care and comfort for the rest of her life,” wrote McKithern in plea letter for Erby. 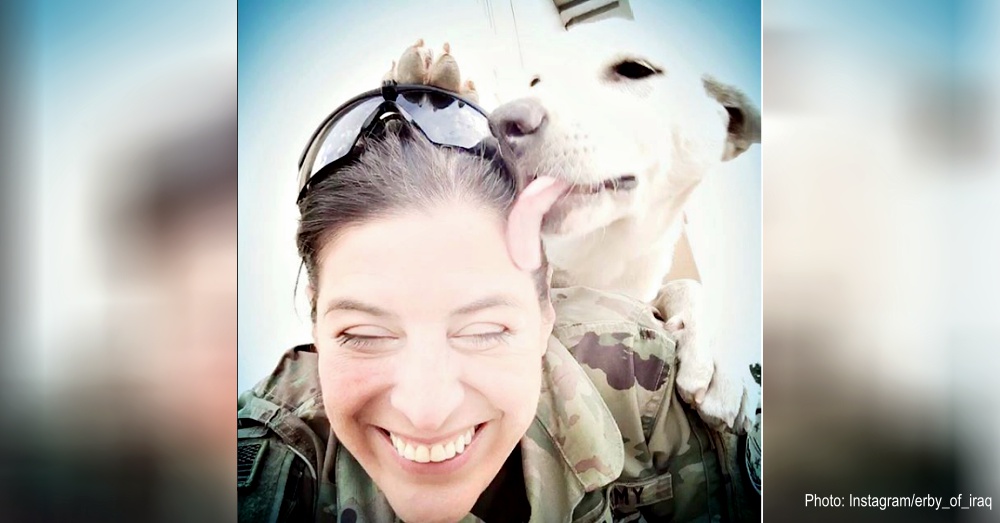 McKithern returned from another deployment to the most wonderful reunion. After she departed her plane in Tampa International Airport, she rounded the corner to see the sweet dog she rescued in Iraq wagging her tail. Erby then proceeds to jump on McKithern and cover her in wet kisses. “Do you remember me? I remember you. I missed you. You are so big,” exclaims McKithern at their reunion. Seven months had passed since she last saw Erby. She was still a puppy and growing.

McKithern states that she saw Erby’s mother in Iraq. She is being taken care of and up for adoption. Hopefully, someone will adopt her soon. Erby has her own Instagram page for all her fans to follow her on all her adventures with her sibling, Whiskey Tango.

The Animal Rescue Site is proud to have helped reunite Erby and Sgt. McKithern. Help deployed soldiers save animals here.

The emotional reunion was captured on video and shared for all to see. Check out the video below.