It’s been called battle shock, shell shock, and combat fatigue. No matter what you call it, post-traumatic stress disorder is a real and threatening issue for many American veterans, but some are finding hope in the saddle.

Physiological damage suffered from violent events during war or peace time has been linked to mental conditions like anxiety and depression, flashbacks, and hyperarousal, all symptoms of PTSD. For those with the condition, the battle often continues in civilian life. Some, sadly, turn to drugs and alcohol; others find respite in more constructive means, like education, art, or public service.

The methods used to treat PTSD are in no short supply, and vary in effectiveness. For those participating in equine therapy, however, comfort comes in the form of a four-legged friend.

Veterans like Retired Marine Kevin Sakai understand the benefits of this breed of therapy. Sakai, who’s been paired with a former race horse named Clayton, served in both Iraq and Afghanistan before coming home to a PTSD diagnosis. Working with horses helps him stay grounded and in control of his emotions.

“There is something peaceful about being around the horses,” he told CBS News in 2016. “It’s just really relaxing.”

An estimate from the U.S. Department of Veterans Affairs maintains that about 20 percent of all living veterans suffer from PTSD. Far fewer of them reach out for help, either out of embarrassment or defense. Sakai, a member of the few and the proud, is happy to be part of an even smaller minority of veterans surviving and thriving with PTSD.

“I just had short temper but being a sergeant in the Marine corps, it’s kind of that expectation that are you doing your job well when you are kind of on that edge a little bit,” he told CBS. “The problem was carrying that home.”

For former Navy Seabee David Vernaza, PTSD had made him reclusive, withdrawn, emotionless and combative. After years of seeing psychoanalysts, he was referred to equine therapy 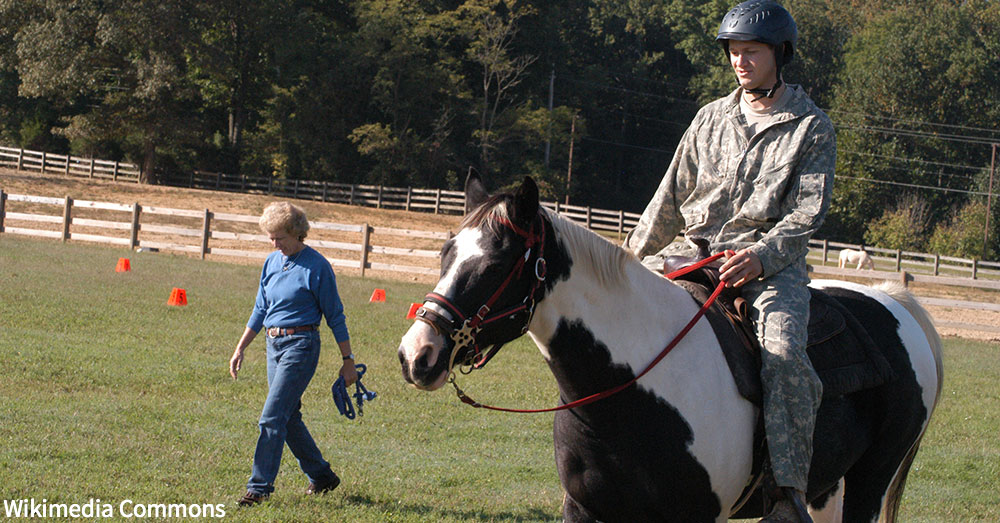 “When David came to us, he seemed mad at the world,” she told Everyday Health. “As he bonded with Jake, he seemed to soften every week and then became one of our most active members of our program.”

In equine therapy, participants like Sakai and Vernaza not only enjoy horseback riding lessons, they assist in caring for the animals. Many therapy horses are rescued from troubled pasts themselves, and become more than just riding partners to the scarred but healing veterans who sign up for classes. The bonds that develop in a just few sessions are strong enough to make even the hardest of hearts open up.

Equine therapy is not relegated to ex-military, of course. There are a number of other groups that have found hope in horses. Police and other first responders in Longmont, Colorado, a demographic in which suicide once claimed over 50 lives in 6 months, have been working with equine therapy for over a year. 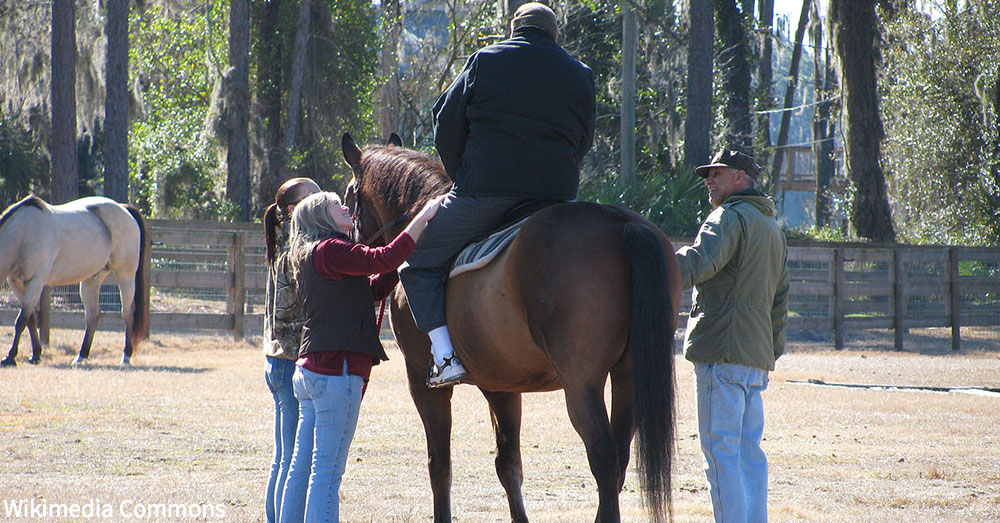 A testament to the effectiveness and popularity of equine therapy, the short documentary “Ride My Way Back” was released to awards and awe in 2015. “A story about a veteran, a horse, and hope,” the film was made by Academy Award nominee Robin Friday and Peter Rosenbaum. It shares the true story of Staff Sergeant Aaron Heliker’s return home after combat in Iraq and Afghanistan, where he had sustained a traumatic brain injury and the seeds of PTSD were sown.

Feeling isolated and nearly driven to suicide, Heliker finds meaning in life once more from a horse named Fred. 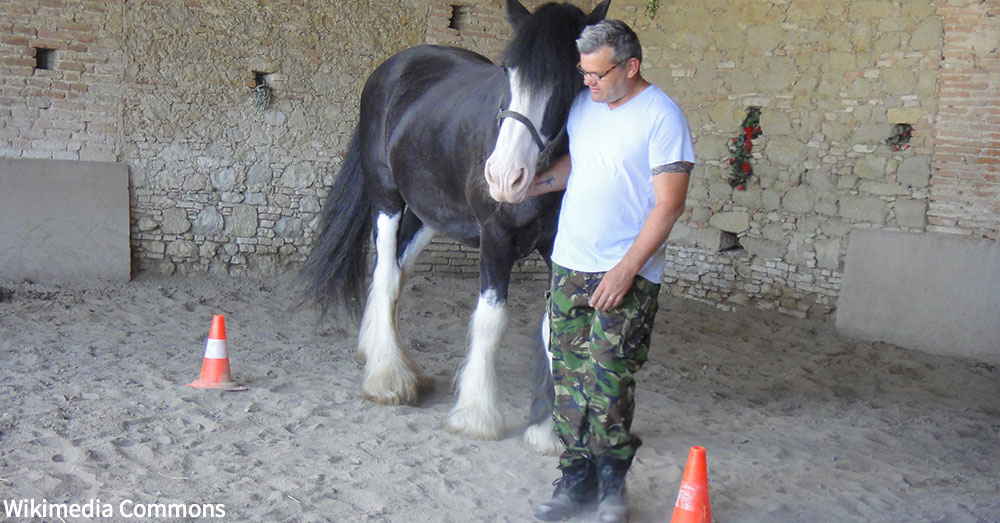 Being a relatively new form of treatment for PTSD, there is still much to be learned in the field of equine therapy. A study being conducted by the Columbia University Medical Center and the New York State Psychiatric Institute is hoped to reveal some insight about its process.

“Horses, like people, are highly social animals who are sensitive to the emotional states of others,” says co-lead investigator of the study Prudence Fisher, PhD, associate professor of clinical psychiatric social work. “In addition to being patient, horses are prey animals that are known for their hypervigilance toward potential dangers — just like people with PTSD. We think that horses may reflect back some of the emotions that patients with PTSD are experiencing.”

This testing will provide some much needed data on the therapy’s effectiveness, Horse Talk reports.

“Anecdotally, using horses has shown some promise in treating a range of mental health problems, such as PTSD and depression,” she said. “However, therapy programs that use horses are not standardized and are highly variable in both content and delivery, so we haven’t been able to determine if it is truly effective in reducing symptoms of PTSD and depression.” 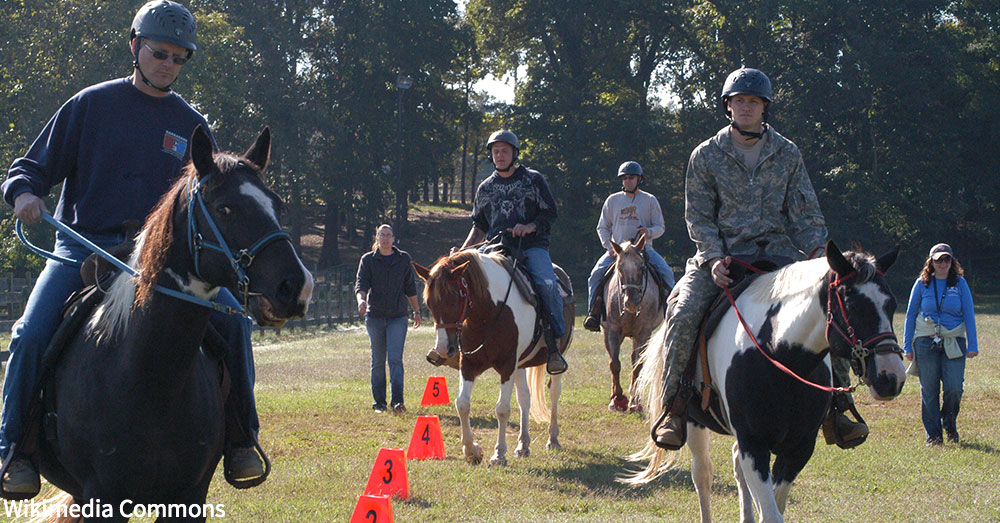 Where equine therapy is used, in many cases, horses have been adopted out of poor conditions, and painful pasts. There is currently work being done to end the practice of horse soring, where would-be show horses are intentionally abused to walk a certain way. Click the button below to sign the petition and help stop horse soring.

For many horse trainers, torturous practices like soring — whipping, burning, shocking, or otherwise irritating a horse’s forelegs to get the animal to step higher when presenting in shows and auctions — are all part of the job.
Sign the petition and tell the USDA’s Animal and Plant Health Inspection Service that the Horse Protection Act needs to be strengthened and enforced today!
Make a difference