A number of billboards are causing a controversy in Detroit. Showing images of lab animals in various states of distress, the billboards point to purportedly inhumane experimentation that has taken place at nearby Wayne State University.

According to Metro Times, the billboards feature dogs who recently died as a result of the experiments.

“Dog #2002” is called out on one of the billboards, along with a description of how she died after undergoing her surgery for the second time.

“The white-and-tan dog was struggling to breathe due to the buildup of blood around her lungs after her chest was cut open and devices were implanted in her heart and near major blood vessels,” Metro Times reports. “Seven days after the surgery, she was euthanized.”

The Physicians Committee for Responsible Medicine, which funded the billboards, and state lawmakers are calling on the school to stop experiments in which dogs are forced to undergo painful and invasive surgeries intended to cause heart failure.

“Under contractual agreement, the DLAR also provides veterinary care service to Detroit VA Medical Center which has a major affiliation with the WSU School of Medicine,” the DLAR website states. “Animals, cages, supplies and/or equipment are purchased by the DLAR for the facilities it operates. All animal purchases are placed through the DLAR for quality assurance reasons and to ensure that all animals are used only in approved IACUC protocols.”

Through Freedom of Information Act requests, the PCRM has obtained veterinary records and official protocols from WSU related to cardiovascular experiments on dogs dating back to 2009 (prior records were unavailable).

“Since 1991, Wayne State faculty and staff have used dogs in heart failure and hypertension experiments,” the PCRM reports. “Currently, those experiments involve performing numerous surgical procedures on each dog, implanting up to nine medical devices in each dog’s heart and near major blood vessels, and drastically increasing the dog’s heart rate with surgically implanted electrodes to induce heart failure. Vascular clamps are used to restrict blood flow to a kidney to cause hypertension. To control the devices and collect data, up to nine cables and wires are surgically ‘tunneled’ between the shoulder blades of each dog, and the animal is fitted with a restrictive vest. Dogs are then forced to run on treadmills while heart failure and/or hypertension are induced.”

The surgeries are so intensive that as many as 25% of dogs die during or shortly after the procedures before any data are collected, rendering their participation in the tests completely inconsequential.

Michigan Governor Gretchen Whitmer in early 2020 demanded the University “suspend activities that are not necessary to sustain or protect life,” yet dogs continue to be subject to painful heart failure experiments, BusinessWire reports.

Together with the Michigan-based Attorneys for Animals, the PCRM formally requested an investigation from Michigan Attorney General Dana Nessel and Wayne County Prosecutor Kym L. Worthy into Wayne State’s violations of the executive order. A letter to the president of Wayne State University, M. Roy Wilson, MD, urging the immediate adoption of the dogs and a permanent end to the experiments altogether. Two months later, Dr. Wilson confirmed that the experiments were still in progress.

“Wayne State is putting human lives in danger by continuing to send staff into this laboratory in the midst of a statewide lockdown and global pandemic,” wrote John Pippin, MD, FACC, director of academic affairs for the Physicians Committee. “Wayne State has spent 29 years and $11.6 million trying and failing to learn about human health by torturing dogs. We’re urging them to stop these experiments immediately.”

Philanthropist Thomas Mackey has offered a $1 million donation to a scholarship program for Detroit kids on the condition that Wayne State University end its animal testing.

“If people knew that their tax money that they pay is going to the government and the government, both state and federal, is paying Wayne State to torture dogs there would be a lot more outcry,” Mackey told Fox2Detroit.

No medical schools in the U.S. use animals for training anymore, but they’re still being used in harmful experiments at schools like Wayne State University. Ryan Merkley, a spokesman for PCRM, says over the course of their three dog testing programs that span 30-years, the university has spent nearly $12-million in taxpayer money from the from the National Institutes of Health (NIH), with little to show for results.

Merkley and PCRM have been advocating for the passage of bills like House Bill 5090 (SB971) and House Bill 4496, which are both aimed at reducing the number of dogs used in laboratory testing. The former would “prohibit the conducting of research or training activities on dogs in a manner that causes pain and distress,” while 4496 would “require research facilities to offer laboratory animals no longer used for research…for adoption before euthanization.”

Help us end these unnecessarily cruel experiments on animals by supporting the Michigan State Representatives who have sponsored these bills. 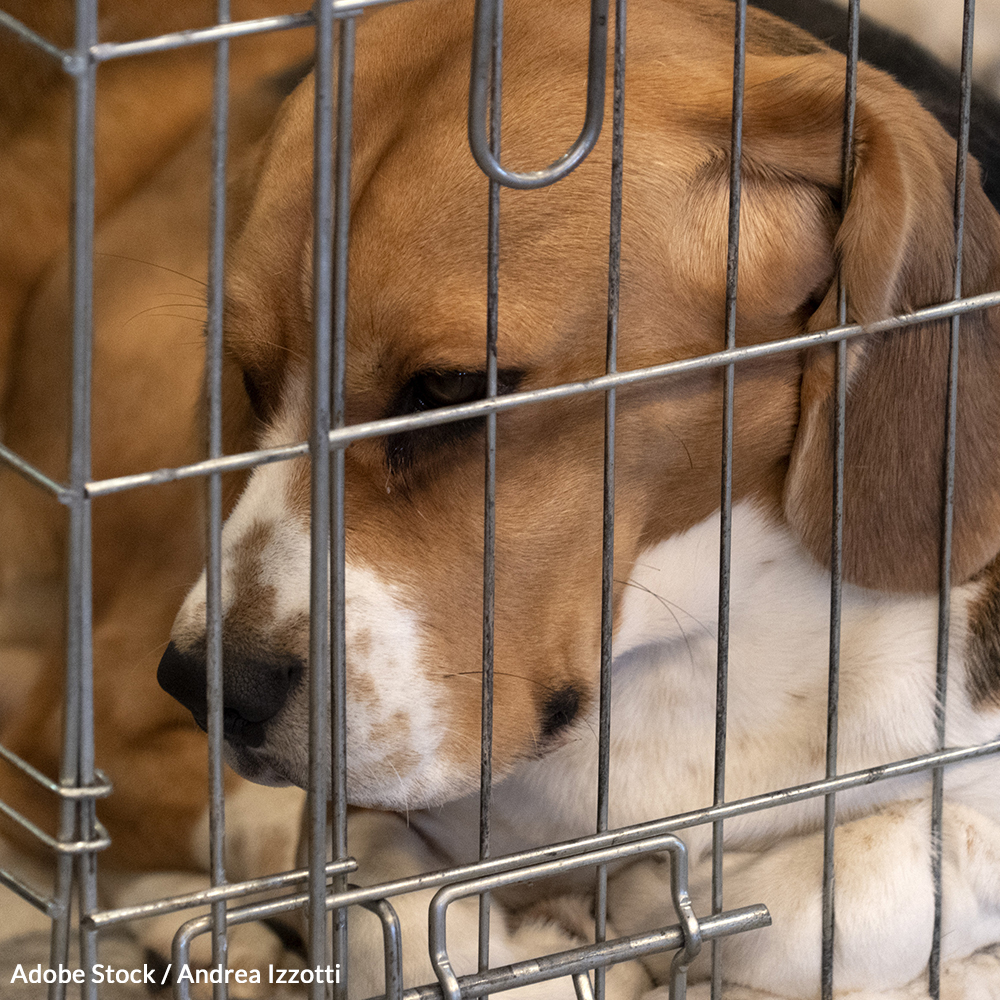 Since 1991, Wayne State faculty and staff have used dogs in heart failure and hypertension experiments, spending nearly $12 million with little to no results to show for it.

Help us end these cruel experiments on animals by supporting the Michigan State Representatives who have sponsored bills to reduce the number of unnecessary tests on dogs.