Ducati the Belgian Malinois was fine until his owners brought him to Mexico where he received an unknown vaccination that rendered him paralyzed from the neck down. That’s when his owners dumped the 3-month-old puppy at Maricopa County Animal Care and Control in Phoenix, and never looked back. He was quickly slated to be euthanized until the shelter contacted Trish Houlihan, founder and executive director of Saving Paws Rescue, a Phoenix-area rescue that automatically came to Ducati’s rescue just three hours before he was to be put down.

“When I got him he couldn’t hold up his head at all,” Topliff said. “He was totally limp from the neck down.”

Topliff changed Ducati’s diet and also bought lots of diapers as the dog was 100 percent incontinent. 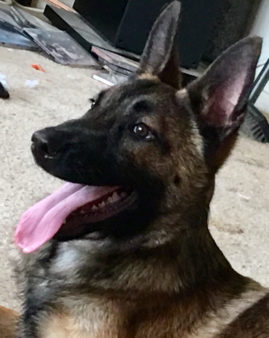 The dog’s official diagnosis was polyradiculoneuritis. A live vaccine given to a dog can put the immune system into overdrive and then it attacks where the nerve connects to the muscle, according to Topliff. The signals then cannot cross to the muscles. “It’s like a phone system but the wire is out and there is no connection,” she said.

“It was heartbreaking to see, but I was more focused on the logistics about the situation,” Topliff said. “This is the problem and how do we fix it?”

From the day Topliff brought Ducati into her home, his paralysis didn’t stop him from being a sweet dog. Although very alpha, Ducati is very gregarious and not fearful at all. “He has always
been up to the challenge, which has helped with his rehab.” 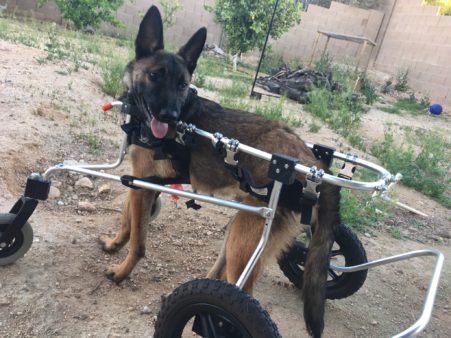 To start his rehab, Saving Paws and Topliff got in touch with Kate Titus, owner of A Loyal Companion, who helps to rehabilitate dogs. After the first visit and assessment, Titus loaned Ducati a cart and began working with him. “We had to move one foot forward and the next as he could not even move his foot,” Topliff said. “We got him vertical so he would not get pneumonia. He could only tolerate being up in it 10 to 15 minutes a couple times a day at first.”

Swimming therapy with Titus was next. “Kate just wanted him in the water during the first visit, but he started moving!” Topliff said.