A rescued dog showed his gratitude to a local fire fighter after being pulled from fast-moving flood waters in McKinney, Texas.

The dog and his owner found themselves in high water after heavy rains flooded the area, leaving them with no time to escape. A video shows the pair being lifted to safety by rescue teams. The long operation began around 3:30 a.m. when emergency services received a 911 call from a man trapped by the flash flood. Police were able to track him by coordinating pings from his cell phone to nearby towers. They located him underneath a bridge over the El Dorado parkway near College Street. 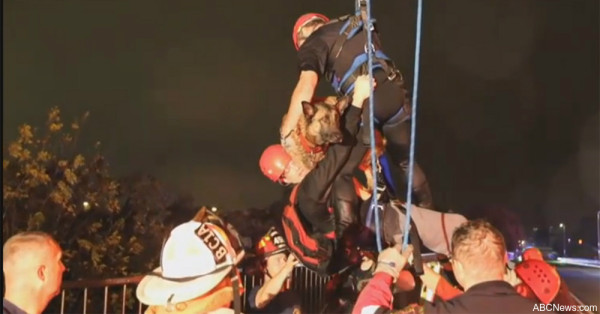 When crews arrived, they found the man standing chest-deep in rushing water and holding his large dog, a German Shepherd who had clambered onto his shoulders. Eye-witness and professional photographer Michael O’Keefe, who shot the video, told reporter Meredith Yeomans at NBC Dallas-Fort Worth News that at first he could only see the dog, which was standing on the shoulders of his owner, as he peered down from the bridge.

“I don’t think he was going to leave the dog. I think they were going as a pair,” O’Keefe said. 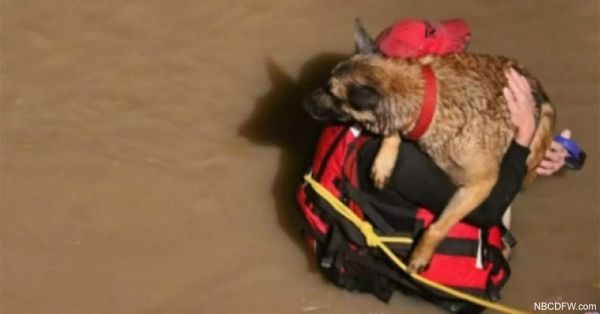 To reach them, the McKinney fire department maneuvered the engine ladders over the water. Specially trained rescue personnel were then lowered down on ropes to reach the pair. The spokeswoman from the McKinney Fire Department told reporter Chris Beattie from the McKinney Courier-Gazette that the rescue process was lengthy. The video captured the man and dog being hoisted to safety by one of the team members.

When man and dog finally found their feet back on firm ground, both were extremely grateful, but it was the German Shepherd, named Duke, who wrapped both forelegs around his rescuer and planted wet kisses all over his face. O’Keefe snapped a shot of the happy moment. 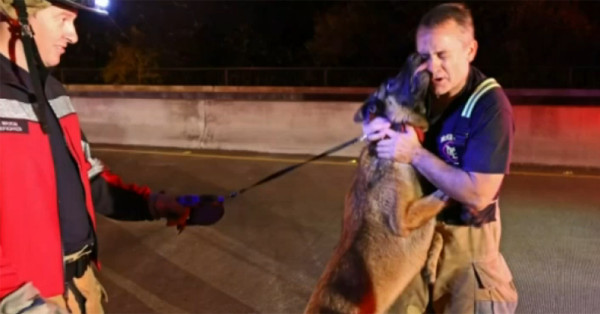 Thinking about rescuing a pooch yourself? Meet the lucky dogs who have a second chance at life thanks to the hard work of dog lovers and animal shelters.