We’ve all been on the Internet spiral of watching videos. Natalee Salvador was on Facebook when she came across a video that she knew she wanted to try – it was that of a cat happily playing with toilet paper< that was suspended from the ceiling fan.

The idea seemed like a good idea – a way to provide her pets with hours of entertainment using household items. 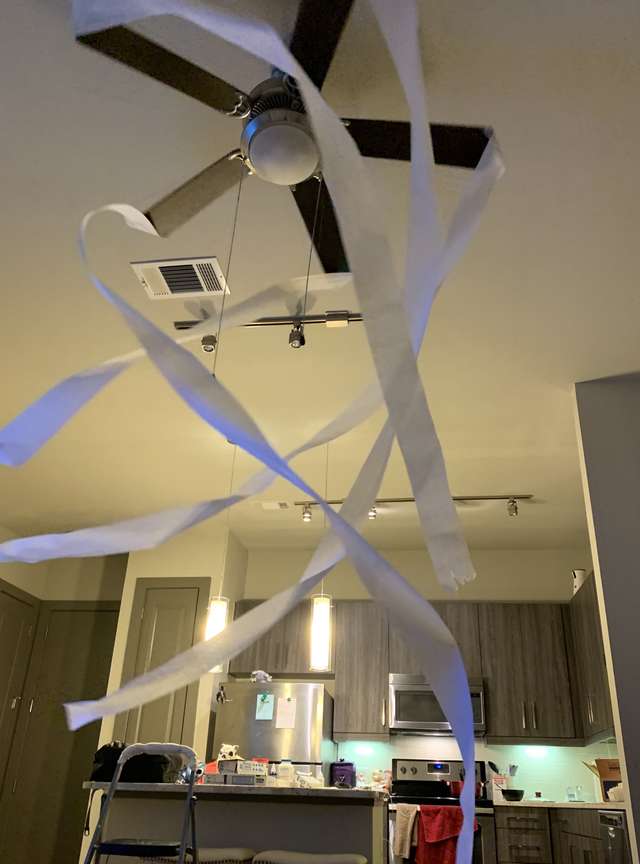 Salvador said to the Dodo, “My husband got our stepladder out and he taped the toilet paper to the fan. I thought [Merlin] would play with it, but he couldn’t have cared less. He was not impressed!”

Both she and her husband had given up on Merlin playing, but let the toilet paper on the fan. However, it was their 6-year-old English bulldog, Bentley, who ended up giving them the reaction that they were looking for.

“Bentley always overreacts to any little thing that is different than his usual ‘norm,’” Salvador stated. “He goes after our vacuum … he gets startled if I move the barstool too fast. So really anything that bothers him he will react to and it’s pretty funny.”

When Bentley saw the spinning fan with the toilet paper he got excited and hurled himself towards the fun. It was a nice surprise for his parents, and it was clear that he was enjoying himself based on the look of pure joy on his face.

You can then watch the cute video clip below:

Salvador said, “He was twirling and hopping and I was just like, ‘Wow.’ I don’t usually let him jump like that due to the fact I don’t want him hurting himself but … I couldn’t stop laughing. He is such a happy boy.”

Eventually, after a few minutes, the couple had to intervene and stop the fun by taking down the paper or else, “He would’ve kept going if it stayed up,” Salvador said.

When Bentley isn’t going after the toilet paper “monster,” he likes to sit and cuddle with the couple.