Dogs have an amazing sense of smell that is 100,000 times better than ours. Their powerful sniffer can detect their favorite scents from a distance. A scent that they love is that of their owners. One tiny dog came across a familiar scent that he had missed for six years, his reaction is heartbreaking.

Evlyn Castro’s uncle and Paquito were always together, until tragedy struck. The two were inseparable and went everywhere together. Just like most fur parents, Paquito was more like a son than a dog to her uncle. Their bond was so strong and Castro tells The Dodo, “They were very attached.” 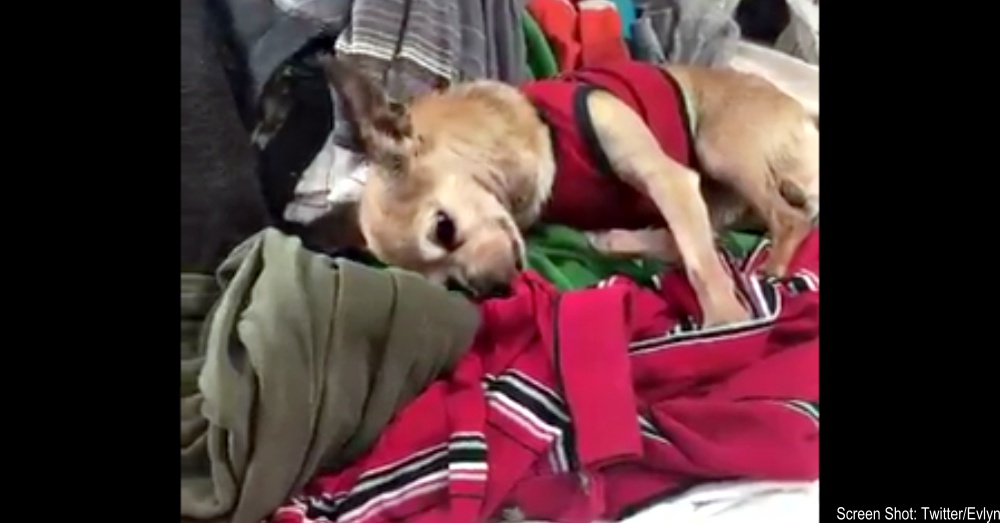 Six years ago, Castro’s uncle became ill and passed away. Paquito was heartbroken and lost without his best friend. The family took Paquito in and showered him with love. Slowly, the pup began to come around.

A dog does not forget the scent of someone they loved. One afternoon, Castro was at her aunt’s house going through boxes that became wet during a rainstorm. They stubbled upon a box of her uncle’s clothes that had gotten wet. They took the clothes out of the box and what happened next touched their hearts.

Paquito picked up the familiar scent and headed straight for the pile of clothes. He rubbed his body all over the clothes and slowly took in the scent of his dear friend. “”We took out all the clothes and put them on the floor to finish drying. As soon as we did, Paquito ran in,” Castro said. “He laid down on top of the clothes and spent a long time smelling and snuggling them.”

Once the little dog captured the scent he did not want to let it go. For a moment, he felt as though he was back with his best friend. “He felt his smell after years,” Castro said. “He did not want to move away from the clothes. It was very emotional.”

The video touched the hearts of thousands, showing that dogs mourn the loss of loves one just as we do. The family feel blessed to have such a loving dog and a constant reminder of their dear uncle. “Paquito is a super loved dog,” Castro said. “We love him very much and are here to give him all that he needs.”