Dog fighting is illegal in all states. However, the cruel act still takes place. Many dogs are abused, used as bait dogs, or forced to fight.

Jones County Sheriffs Department received a call from a person who found a badly injured dog laying on their property. The sheriff department contacted Southern Cross Animal Rescue (SCAR) to help with the dog. The rescue arrived at the scene and were heartbroken at the condition the dog was in. 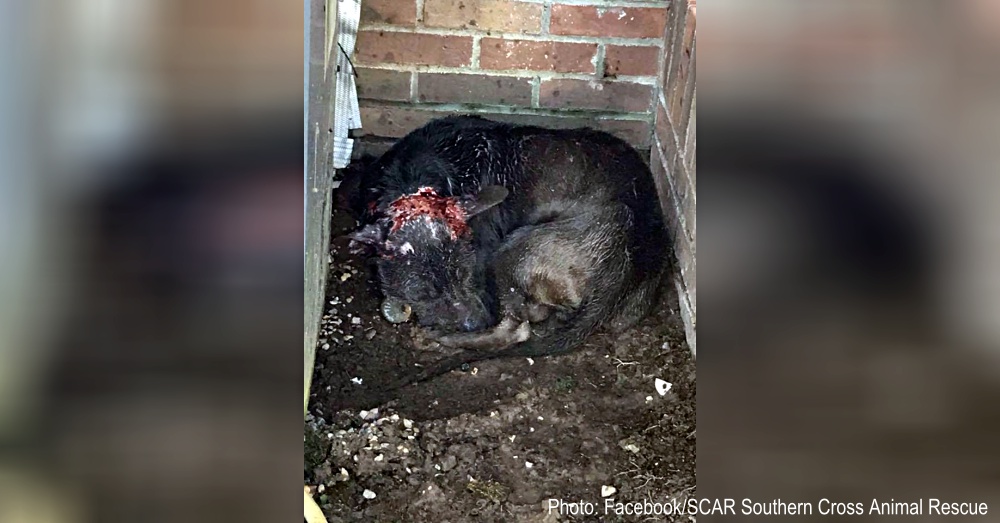 The dog was curled in a ball laying next to the home with obvious head wounds. The dog did not move or make a sound as the rescuers approached. Slowly, they slipped a leash around his neck and then the dog stood up. The rescuers saw how bad his condition was and brought him to a vet for an evaluation.

“His emaciated little body had multiple bite wounds and abrasions, his back right leg was swollen and he couldn’t put any weight on it, his head, ears and neck had deep lacerations all the way to the bone. It was truly a devastating thing to see,” posted the rescue.

They named him Atlas after a greek titan, because he showed so much strength. Although he was in extreme pain, he remained sweet and appreciative. The rescue vowed to fight for him.

The road to recovery will be long and hard, but Atlas is tough. The rescue is asking for donations and items to help make Atlas as comfortable as possible during recovery. The wounds could not be sewn up and will need to heal on their own.

The devastating wounds are from being a bait dog and having other dogs attack him. Dog fighting is inhumane.The police are still looking for the person responsible. Be the voice for the voiceless and speak up if you suspect dog fighting in your area. All dogs deserve to be in loving homes.

Watch Atlas enjoy his first loving pat and finally relax in the video below.