One of the most inspiring images is that of the moment an abandoned, abused, and terrified dog has fully recovered. Dogs with mange, pounds of fur tangled to the point where they can’t walk, and missing limbs are far too common. Seeing a dog cleaned up, safe, and able to be its doggy self will never fail to inspire.

These makeovers often save the dogs’ lives, and in more ways than one. Even dogs that aren’t in horrific condition benefit immensely from being groomed properly. A large part of adoption comes down to the pictures shelters present to the public. A quality photo increases a dog’s chances of finding a home immeasurably. And a good photo requires these incredible, massive makeovers.

Since so many dogs come into shelters unkempt and in need of cleaning up, GreaterGood.org teamed up with Wahl, a leader in grooming products for people and animals, to clean up and clear out shelters all over! The donations from Wahl will help more than 20,000 dogs in need.

In celebration of these shelters, we are holding our sixth annual Dirty Dogs Contest, giving shelters a chance to win cash grants in order to continue their amazing work. The public will vote on the top 10 stories and then narrow them down to the top three, all of whom will receive grants. Below are just a handful of the dozens of stories we’re featuring this year. Make sure to head over and vote for your favorite! 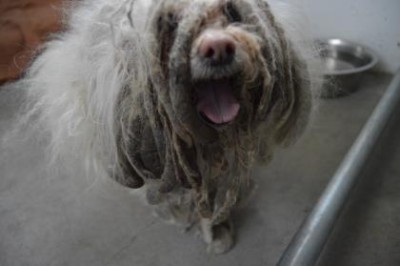 Veera was found on the side of a highway. Her hair was so long and matted we could barely see her face. Her toenails were so long it was painful for her to walk. Yet we could tell instantly she had a heart of gold. She allowed shelter staff to shave and bathe her, which was a long and difficult process. Without all that filthy hair, her smile was huge compared to her little body. Veera is a wonderful dog, full of joy! She just loves to be on a lap and cannot wait until someone adopts her. 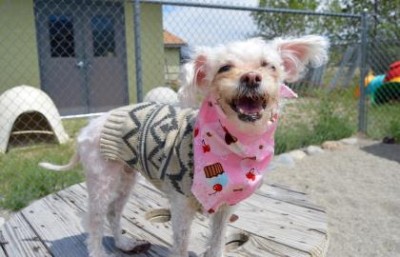 You can find out how to adopt Veera on Petfinder! 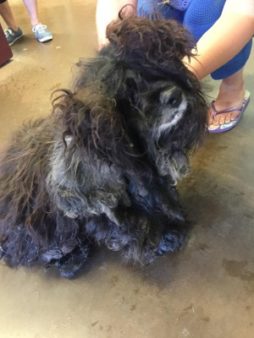 This is Bella. She was found in a very poor neighborhood by a citizen. They could not afford to keep her and brought her to the shelter where they knew she would get the care that she deserved. Upon arrival, she was matted and covered with everything imaginable. When groomed, her coat came off in a full piece like a rug. It took all day to try to get this little girl looking and feeling better. She is heart-worm positive. She was spayed by our facility and transported to a rescue specializing in cocker spaniels where she is receiving full heart-worm treatment before being put up for adoption. Despite the neglect that she received (obvious by her appearance), Bella is a lovely personality that still loves and trusts people. Her makeover just made her as beautiful on the outside as she has always been on the inside!

This is Bella now! 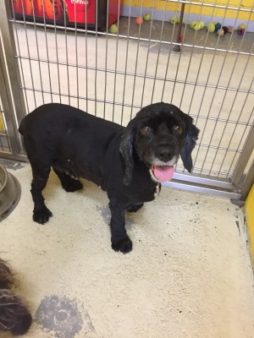 You can reach out to Pearl River County SPCA in Picayune, MS, to find out more about adopting Bella. 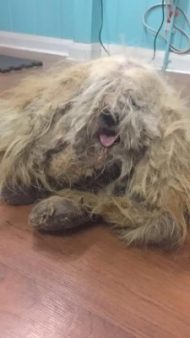 Sissy is 12 years old and a Lhasa Apso who was so badly matted it was difficult to tell that she was a dog. She was one of five Lhasas that came to Suncoast Animal League in horrible condition.

The five dogs came into Suncoast Animal League’s possession at 12:30 am on February 23, 2017. I made the hour drive and arrived at 1:30 am at Island Dog Outfitters to begin grooming the dogs.The drive was not a pleasant one given the horrendous odor associated with the dogs. When it came time to start the grooming process on Sissy, it was difficult to figure out where to start. Her ears where matted to the side of her head. Her chin was matted to her chest and her face was so matted that her muzzle no longer fit into a bowl. Feces hung like dreadlocks to her backside, and her four paws were the size of boxing gloves. Her nails barely protruded through the matting, and, later on, we found them to be over four inches long. The matting over her eyes prevented her from seeing, and we would later find out that the matting caused permanent damage to her eyes. Her teeth were wrapped with matted hair. Her body was entombed within the matted hair. The grooming that began at 1:30 am and ended at 9:30 am, with all five dogs—who would come to be known as the Fab Five—being groomed.

That same day, all five dogs were seen and examined by a veterinarian. It would be the beginning of a medical odyssey that would cost over $7,000 and end on April 2nd with Sissy and the other four Fab Five members getting adopted at a “Lunch with the Lhasas” event. In between, the Fab Five became FaceBook phenoms.

Sissy is thriving in her new home and is getting the individual attention she so richly deserves. It goes without saying that Sissy would not have been adopted without being groomed, but the truth of the matter is, she wouldn’t even have survived without being groomed. Grooming freed her from her own body and provided her with a new life.

Sissy is a totally different dog! 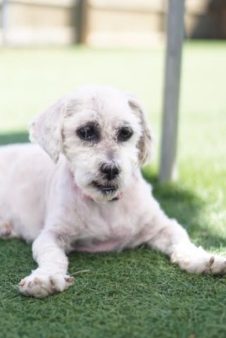 Sissy is one of the lucky ones who found a loving home. She’s the perfect example of how much difference a little grooming can make. 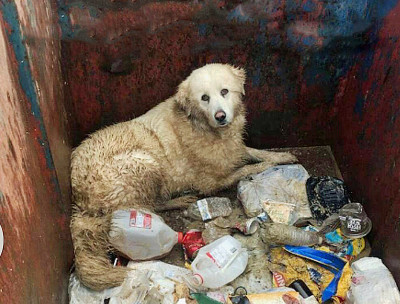 Piper was left to die in a self-compacting trash bin. She was extremely dirty and smelly at rescue. Kelli at Shampoodles in Edmond, OK, does our grooming for us pro bono and spent a good portion of an afternoon with Piper. When she was done, we were all amazed at just how beautiful Piper was. She was seen on our Facebook page after we posted before-and-after pictures and was adopted into the perfect home for her.

What a transformation for Piper! 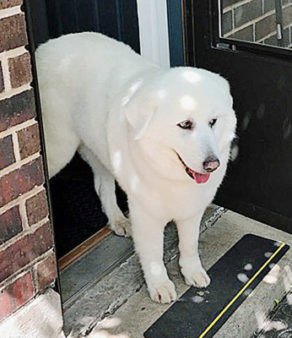 Piper was lucky enough to find a loving family after a horrific story of abuse and abandonment. All stories should end like this! 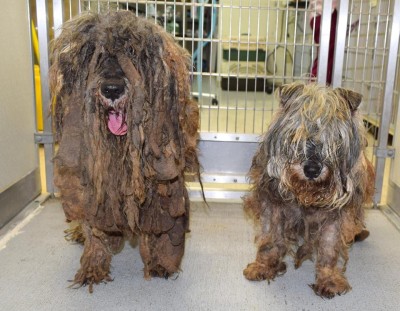 Obviously these two are a bit extreme…thank goodness…but not only does grooming help them to look better, it also gives them a new confidence. They are looking better now, and that makes them feel better! Annie and Andy are classic examples of dog being man’s best friend. Despite people allowing them to get in and stay in this condition, they are loving and affectionate and eager to please people.

You can’t even tell they are the same dogs! 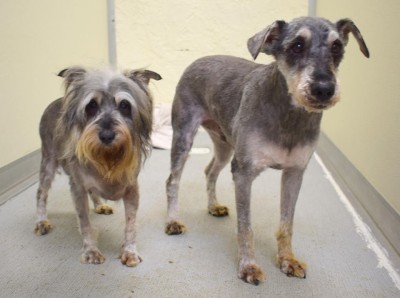 These are some of the most dramatic of transformations, and there is little doubt they’ll all end up in loving homes!

Voting for the Dirty Dog Contest will begin August 8, 2017. Make sure to take a look at all of the entries and come back August 8th to vote for your favorite!