When officials enter a meth house they are covered head to toe in protective gear, including respiratory protection. One tiny kitten was exposed to the dangerous environment – for who knows how long – without any protection.

Daphne, a one-year-old cat, was found barely surviving in a meth home. She was missing most of her fur, suffered from Inflammatory Bowel Disease (IBD), and covered in fleas. She arrived at Seven More Cats, a cat rescue, as an intact female that was extremely lethargic. The staff was unsure what effect living in the meth home had taken on her little body. 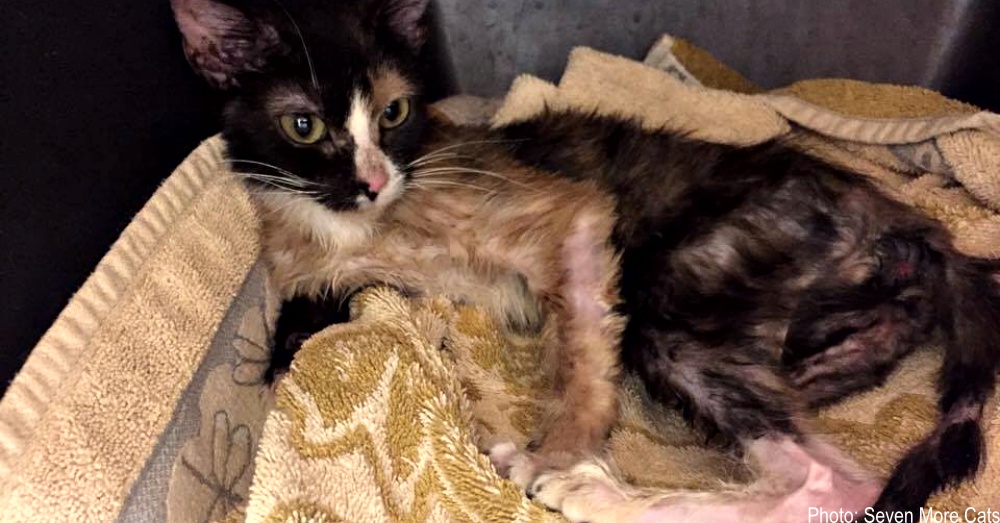 The scared cat was not used to human interaction and would hiss and strike out at the rescue team. Eventually they were able to give her a flea bath, which turned the water red from all the flea dirt. The next step was to do a skin test to see what was causing her to lose her fur. Numerous test took place along with a skin scraping to see why she was missing her hair, and why the IBD would not clear up. Several tests yielded no parasites or diseases to explain the IBD.

After spending several months at the rescue, Daphne started to improve. She is now happy and healthy will all her fur. In order to manage the IBD, she is on a strict diet of high-quality special pet food. This food is expensive but it keeps Daphne feeling great.

Seven More Cats thanks thanks GreaterGood.org’s Rescue Bank program for providing food, which allowed them to use the money saved on vet bills. “Rescue Bank is a godsend. Daphne’s special diet is expensive, but that is the only thing she can eat due to her allergies. Rescue bank has helped us save money on items that are needed by all fosters of normal and special needs kitties. They have enabled us to spend the money needed on vet bills and special food for her.”

Rescue Bank has donated over 275 million meals to animals in need. It is the world’s largest pet food distribution network. The goal is to donate pet food to shelters, rescues and sanctuaries to help feed the animals until they find forever homes. Pet food is the number one expense for rescues, usually taking their whole budget. This leaves little or nothing for vet care and treatment. Rescue Bank steps up to help by sending donated food to rescues in need. The money a rescue or shelter saves on buying food can then be used for vet care, vaccinations, adoptions and much more.


She’s playful, very verbal and demanding of attention. Daphne now loves people. She has come a long way. She found a loving home with another cat, Ned from the rescue. They are best friends.