Do You Know Why The Government Is Poisoning Animals With Cyanide?

The U.S. Department of Agriculture is responsible for controlling predatory and feral animal populations in the country, but its continued indiscriminate use of M-44 “cyanide bombs” has led to a backlash from animal rights workers, legislators, and even grassroots groups of American citizens.

The M-44 resembles a common sprinkler head but, when pulled on or manipulated, ejects a cloud of deadly orange cyanide gas. Such devices are intended to keep coyotes, wolves, and feral dogs off farmland and residential property, but, as the USDA is required to report each year, there is a fair amount of collateral injury as well.

M-44 devices have killed at least 22 domestic animals since 2013, according to the USDA. Along with that, more than 300 wild animals were unintentionally killed, including some protected species and one of the wolves of Oregon’s Shamrock Pack.

“The death of this wolf shows the risk involved when wolves are in areas where Wildlife Services conducts these types of operations,” Doug Cottam, ODFW Wildlife Division administrator told the community. “This is a situation we take seriously, and we’ll be working with Wildlife Services with the goal of preventing it from happening again.”

Just two weeks later, a family in Wyoming lost two dogs while on a walk with their daughter. A Drahthaar dog, Abby, and Weimaraner, Molly, died shortly after triggering a cyanide trap, as the family watched on.

“It was like a horror show,” Molly’s owner Tom Sexton said.

Less than a week after that, in Pocatello, Idaho, 14-year-old Canyon Mansfield was injured, and his dog Casey left dead, after the pair found an M-44 while hiking near their home. Neither local residents nor law enforcement were notified of the cyanide devices that were placed just outside their community.

Bannock County Sheriff Lorin Nielsen said in all his time in law enforcement, there’s never been a reason to worry about stumbling upon weaponized gas in the woods.

“I’ve been a sheriff here for 20 years and worked for the office for 39 years, and I’ve never heard of leaving around a device that emits poisonous gas,” Nielsen said.

While these devices present a great potential danger to people and their animals, for the Wildlife Services agents who install the M-44 devices, protective equipment to handle the cyanide devices, as well as amyl nitrate antidote ampoules in case of an emergency, are provided by the government.

Kent Drake, the predator management coordinator for the Wyoming Department of Agriculture, told WyoFile that there were at least 300 M-44 devices still active in his state. The devices are inexpensive, as far as wildlife management methods go. A single M-44 costs around $30 and carries a $25 application fee, while the sodium cyanide cartridges cost less than $1 each. Drake said they are successful in deterring predators about 35 percent of the time and led to the elimination of 12,511 coyotes in 2016.

“They are a very good tool in certain situations, because coyotes are very crafty animals and it takes a lot of different approaches to get them if they are depredating on sheep and calves,” he said. 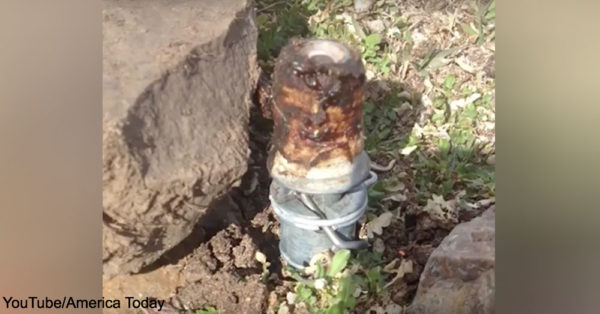 The cyanide bombs have been sharply criticized by animal rights and conservation groups who claim such methods are in direct violation of federal environmental and wildlife protection laws. According to a statement released by R. Andre Bell, a spokesman for the US Department of Agriculture, after the March 16 incident, the devices are only ever used when requested by property owners, and signs and other warnings are posted by Wildlife Services to warn pet owners of potential dangers.

It’s a policy of the Wildlife Services to post bilingual warnings along the perimeter of the property where an M-44 is placed and inspect the devices weekly, but in Pocatello, no such safety measures were taken. No warning signs were found around the Bureau of Land Management property the device was mistakenly placed on by a Wildlife Services agent, according to the Idaho State Journal.

As the Bannock County Sheriff’s Office continues to investigate the Pocatello case, a number of petitions have been launched and groups formed in order to speak out against the USDA’s continued use of the M-44 devices, calling for their ban. Joining their cause are such organizations as the Center for Biological Diversity, Humane Society of the United States, and Predator Defense.

Wildlife Services has not released a number of M-44s currently in use, but you can lend your name to the growing list of those who want them deactivated and destroyed immediately by clicking the button below.

Cyanide Traps Are Unreliable And Dangerous – We Must Ban Them!

Since 2008, 230 dogs have been unintentionally killed by these indiscriminate traps. Don’t let your pet be next!
Sign the petition to urge the USDA to ban cyanide traps immediately and completely.
Make a difference