All dogs can quickly become part of the family, but service dogs often become part of larger communities as well. One welcoming school demonstrated that by including a student’s service dog in their yearbook photo right alongside everybody else.

Joseph Ware, known to his friends as Seph, has been teamed up with his goldendoodle, Presley, for a little over three years, as of 2016. The laid-back 14-year-old lives with Duchenne muscular dystrophy, a genetic disease that causes his muscles to become progressively weaker. Presley goes everywhere with him, helping him pick up items he drops, steadying him when he loses his balance and performing other essential tasks to help him go to school and socialize with friends. Presley has become as well-known as Seph around school, with most students knowing her by name. 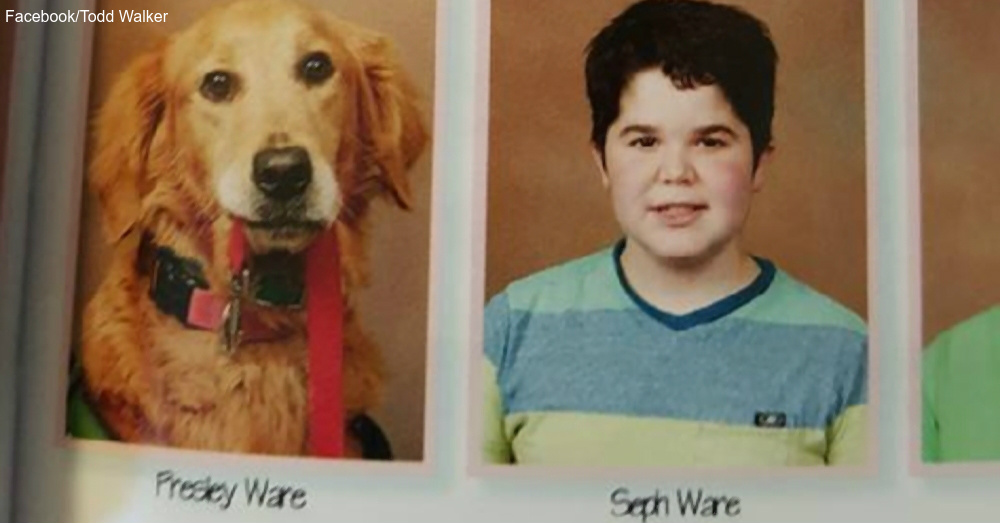 During yearbook photos for the 2015-2016 school year, the yearbook coordinator realized how important Presley was to Seph and to the entire school, so she asked if he would like Presley to have her own photo. Seph agreed, and they spent more than 10 minutes trying to get Presley to pose. The dog’s outgoing personality got in the way, however, as every time they tried to pose her, she rolled over to ask for belly rubs. Finally, they decided to let her hold her leash in her mouth, one of the tasks she performs for Seph so he doesn’t have to lean over and risk a fall. At that point, she posed quietly for an adorable photo.

Seph, being a typical teenager, did not mention the event to his parents when the photos were taken in the fall, nor did he say anything when he picked up his yearbook and saw her featured next to him. Someone else posted the photo online and it went viral, which is how Seph’s parents learned of the lovely gesture by the school.

Service dogs change lives, and Seph and Presley Ware are a great example of how an entire community can come together to support them. Do your part to help veterans in need of service dogs by signing this petition.