It looked like the end for a four-week-old baby squirrel that was abandoned by his mother after falling four stories to the ground from a building in Denmark. Fortunately for the squirrel, a compassionate human, Decan Anderson, found him and nursed him back to health. Now the squirrel, whose name is Tin Tin, is part of Anderson’s family. Upon finding Tin Tin, Anderson took him to a veterinarian to have his wounds treated. Back at home, he fashioned a tiny sweater out of socks to cover and protect Tin Tin’s wounds. 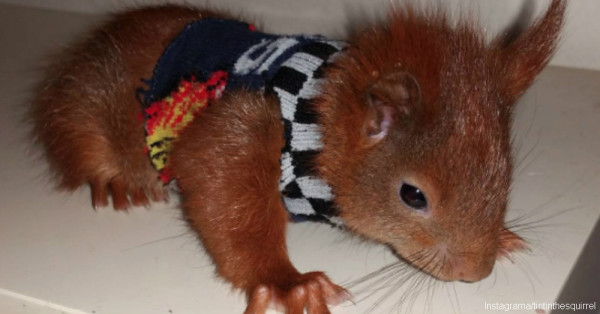 Anderson’s cat Coco stepped in as surrogate mother, cleaning him and cuddling him to keep him warm. At first, Anderson fed Tin Tin around the clock. When the squirrel recovered, Anderson began taking him for walks at the end of a long squirrel leash. Although keeping red squirrels as pets is normally illegal, Danish authorities made an exception in Tin Tin’s case, as he had spent so much time with humans during his recovery that he would be unable to survive on his own in the wild. 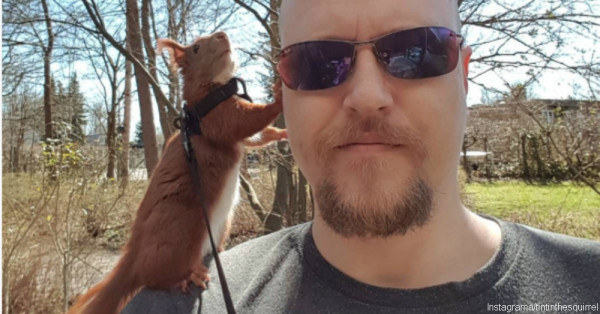 Red squirrels were previously prevalent throughout mainland Europe, the British Isles and northern Asia. With the introduction of the much larger gray squirrels from North America, red squirrel populations have dwindled in various parts of Europe. Not only do gray squirrels bully the reds out of their territories, they also carry a disease that is harmless to grays but deadly to reds. People in some countries in Europe attempt to save red squirrels by isolating them from gray squirrels, preserving forests, and setting up protection stations to care for orphans such as Tin Tin.

Although cats normally hunt rodents such as squirrels, under certain circumstances they are willing to adopt them, as Coco adopted Tin Tin. Read this article about another situation in which a family of cats and some orphaned squirrels made perfect pals.