Cheetos may have a cute name, but the adorable dog has seen his share of difficulties. A car accident took the use of his hind legs, and his owner decided to give up Cheetos because of his disability. However, everything changed with one picture posted online. Fortunately for Cheetos, the staff at Dog Tales Rescue and Sanctuary in Ontario, Canada, brought him to their location. 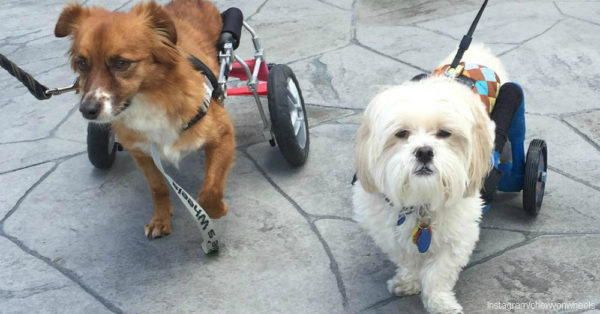 Cheetos may have been disabled, but he definitely didn’t let that discourage him. From the beginning, he was happy and sociable, a spark plug of positive energy. Everybody loved him, and they had a wheelchair custom built to help him get around. Still, finding a permanent home for Cheetos was hard. The sad reality is that when people adopt a dog, they typically prefer one that doesn’t have any disabilities. 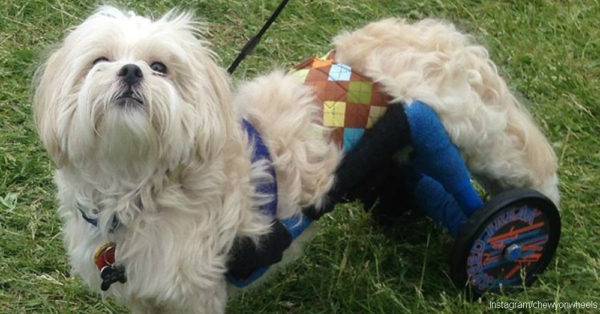 Things turned around when Adrianna Bucci spotted Cheetos’ picture on the Dog Tales Rescue and Sanctuary adoption website. She already knew what it was like to have a special needs dog. Her dog, Chewy, developed intervertebral disc disease four years prior, which eventually resulted in the paralysis of his hind legs. Like Cheetos, Chewy uses a wheelchair to move. 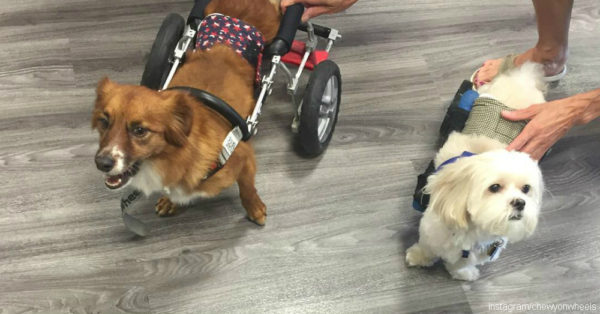 Adrianna brought Chewy to meet Cheetos, and it was pretty apparent from the beginning that these two made perfect partners in crime. The two spent over an hour running around the area in their wheelchairs, having a blast. Adrianna adopted Cheetos, and now the two dogs are friends for life. Cheetos went through some rough times, but he found the right owner and made a great friend in the process. Read about another happy ending for a special needs dog.