Detection dogs work in a variety of fields. Most people are familiar with the police K9s trained to sniff out bombs and drugs. One lesser known type of detection dog is working to improve the health of local waterways and protect the environment by sniffing out dangerous bacteria. Crush is an 8-year-old dog that, along with her handler, works for Environmental Canine Services in Bellingham, Washington, where Crush was trained to sniff out human fecal coliform bacteria. This contamination, which usually occurs due to leaky septic tanks or failing sewage lines, can cause serious illnesses if people consume it. It also harms fish and other wildlife. 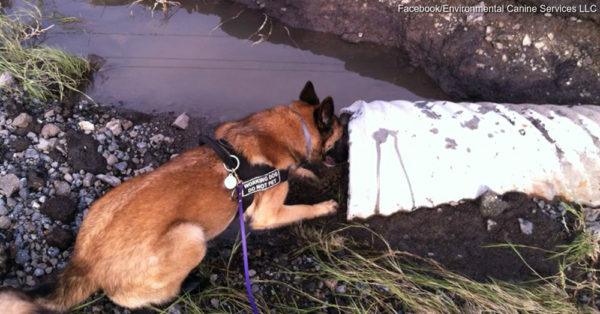 To determine where the bacteria enter the water, authorities take multiple samples and present them to Crush. When she detects the presence of fecal coliform bacteria, she lies down to alert her handler. The samples are then sent to a lab for verification. Crush and dogs like her have an accuracy record of 98 percent.

Sewage-sniffing dogs are becoming popular in environmental control circles. While there are other methods of testing that can determine the source of water contamination, those methods are typically slower and more expensive than using a dog. The California-based Environmental Canine Services teams have worked in 10 different states, with similar teams on the job in New England. 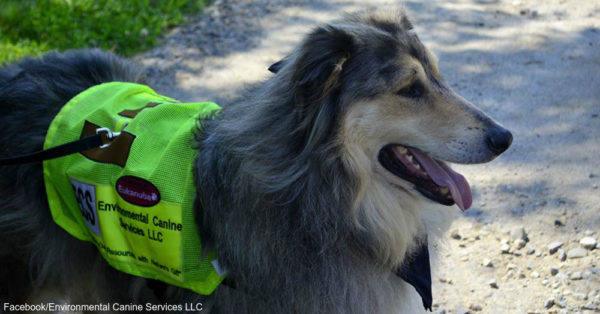 The training works because of the amazing canine nose. Dogs’ sense of smell is approximately 1,000 times greater than that of a human, and they are capable of amazing scent discrimination. Crush can tell the difference between human and livestock waste, and she can ignore other pollutants, such as detergents. Her incredible nose can detect even trace amounts of waste. The training is similar to the nose work training that other detection dogs receive, with the dogs trained by turning the search into a game. Crush and other sewage-sniffing dogs use their amazing sense of smell to keep our waterways healthy. Learn about other amazing detection dogs using their abilities to sniff out cancer.