A Jacksonville, Fla. police officer got an unexpected visit from a lost dog when the pup hopped into his squad car and cuddled up in the passenger seat. The friendly pit bull had been separated from her owner, but seemed to know just where to go for help. Brand new to the Jacksonville police force, Officer Larry Taylor was driving his first ever police car when he got a call in Zone 4, on the western side of town. When he opened his door, the lost pit bull jumped inside. 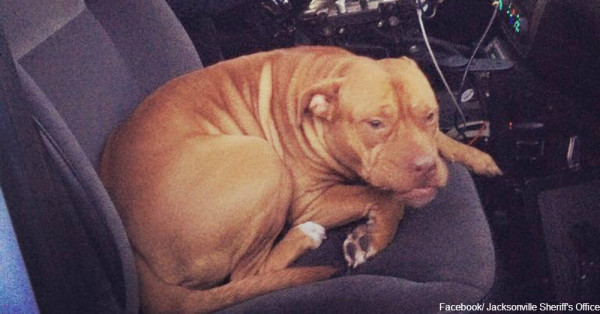 Whether the dog was looking for refuge from the chilly morning weather, or just had a nose for sniffing out friendly faces, she picked the right man to ask for help. Officer Taylor let the dog curl up beside him while he located her owner. The pair spent some time together while Taylor typed up a report about the chance encounter. A photo of cop and pup was posted afterwards on the Jacksonville Sheriff’s Office’s Facebook page. In the snapshot, Officer Taylor grins happily as he types, and the red pit bull seems to smile, lying down on the passenger seat with her ears flopped back. The dog later went home with her relieved owner, who now has a special story to tell. 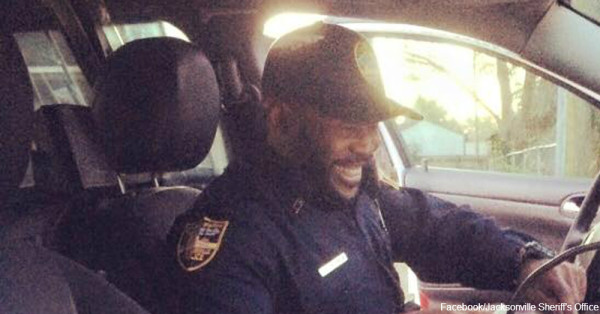 Comments poured in after the cute post. One animal-lover suggested, “Maybe she always wanted to be a police dog when she grew up!” Another added, “Dogs are a good judge of character.”

Jacksonville public information officer Melissa Bujeda told the press that local officers see each person “as unique” and “are trained to treat each encounter as such.” It would appear that Officer Taylor knows that the same goes for dogs.