It’s hard living on your own, especially for a herd animal such as an elk. Buttons, an orphaned elk in Washington state, is beating the odds and making plenty of friends in the process. Elk often rely on each other for survival, assisting others of their kind by communicating danger and following safe migration routes. Orphaned babies face many risks, but Buttons seems to be thriving. Residents of the area around Route 10 near Cle Elum, Washington first noticed her hanging out by herself in 2015, and since then she has become a regular visitor to the neighborhood. Some people describe her as a mascot and look forward to sightings. 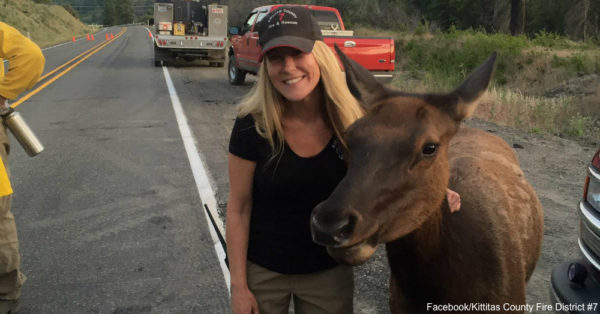 Although Buttons doesn’t have any elk friends to spend time with, that doesn’t seem to bother her. When other elk pass through the area, she typically ignores them. Instead, she enjoys spending time with domestic horses, goats and cattle in the area, and those animals seem to have accepted her in return. 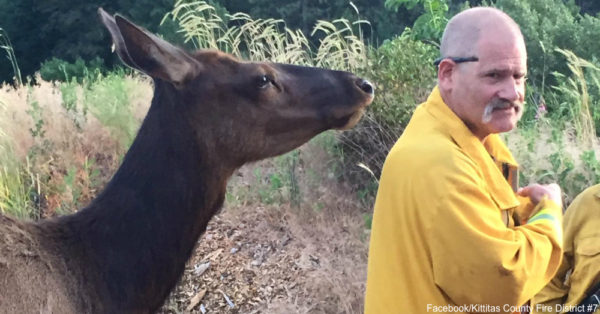 Learn more
She spends some of her time browsing on the hill near Chimpanzee Sanctuary Northwest, and sometimes comes down to visit if she sees an open house or other event happening. Buttons often walks right through the barn, asking humans for attention and treats. Her courage can cause trouble, however, as she sometimes tries to follow people into their homes and has caused some minor damage, such as breaking screen doors. However, most residents haven’t had any trouble.

Buttons even showed her gratitude to some firefighters who were working to control two wildfires that broke out in the area over the Fourth of July weekend in 2016. She visited their command post and spent time cheering up the hardworking firefighters by giving them kisses and letting them pet her. 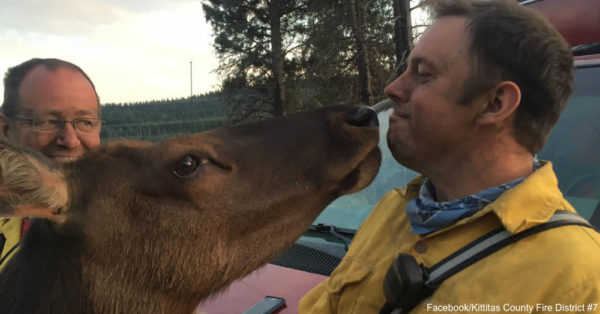 The fire crew took pictures of Buttons and posted them to their Facebook page, hoping to spread the word about this eccentric elk and keep her safe from hunters. Buttons was lucky to survive on her own as an orphan, and she shares the love with her affectionate personality. Help another orphaned baby return to the wild by supporting this adorable moose calf.