Officials in Northern Ireland seized a family’s dog when no one was home as the pet looked too much like a pit bull. The family says their two-year-old dog is a Labrador and Staffordshire terror mix that is not aggressive. An assessment of the dog is underway to determine the next steps in this heart-breaking story. In mid-July of 2016, eight Northern Ireland police and four animal control officers seized a family dog named Hank for having an appearance resembling a pit bull, according to The Dodo. For owners Leonard Collins and Joanne Meadows, this came as quite a shock when they came home to find Hank gone and a warrant hanging on the door describing what happened. Breed-specific legislation, specifically Dogs Order 1983, is still in place in Northern Ireland, and it restricts the ownership of any dog that resembles a pit bull. Collins and Meadows are adamant that dog experts they consulted when Hank was a puppy told them that Hank is a Staffordshire bull terrier and Labrador mix. They also say that Hank is a very playful, sweet sleep-a-holic that has never shown aggressive behavior. 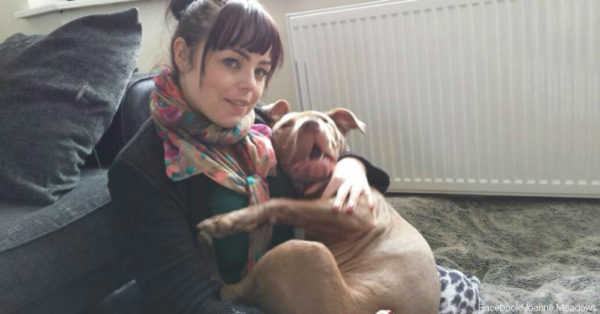 The officials holding Hank say he is under assessment now, and if his measurements and temperament place him in a specific category, he is to be put down, according to the BBC. The same officials claim that Hank’s needs and health, including a pre-existing skin condition, are a priority until there is a determination made. In the meantime, Collins and Meadows do not have access to Hank or even know where he is. They have the option to either sign Hank over to law enforcement for termination or fight for him in court if the finding is that he is a ‘dangerous dog.’ Collins hopes to fight for Hank’s life in court, as well as influence change in legislation. 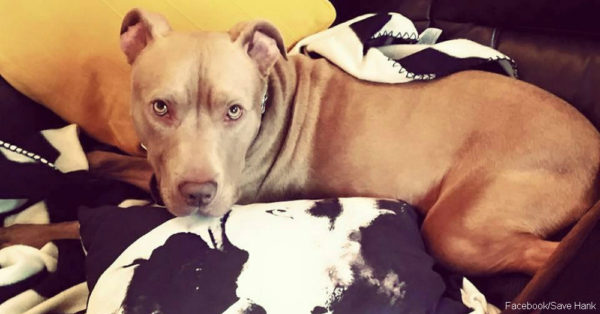 A few days after Hank’s story broke on social media and in the press, an online petition to save him from destruction had gained over 65,000 signatures. The show of support from across the globe helps Collins to feel more positive as he and his family face the legal system. As of July 19, 2016, iTV reports that a separate fund raised almost 11,000 pounds for any legal costs the family needs. The officials seized Hank following a report from a member of the public. Joanne Meadows wishes this person had raised concerns with her instead of going straight to the authorities. While she maintains that Hank is not a pit bull, many pit bulls are loving and gentle. Watch this video showing a pit bull giving love to a pair of baby ducklings.