Animal Aid Unlimited, an animal rescue group in India, is used to rescuing and rehabilitating dogs that live on the streets. However, the group got a different kind of rescue mission when a baby chipmunk fell from its nest. Fortunately, the group had at least one member who wasn’t afraid of heights. According to DailyMail.com, the baby chipmunk fell about 20 feet from a nest on top of an air conditioning unit all the way to the ground. The chipmunk’s mother was distraught, and her constant screeching alerted residents that something was wrong. The baby chipmunk was unharmed, but had no way to climb the wall and get home. 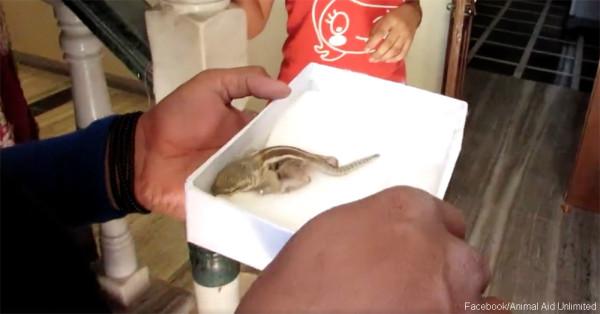 The residents placed the baby chipmunk in a small box with some padding, and then called Animal Aid Unlimited. The group soon arrived, and came prepared with a harness and plenty of thick rope. A couple group members went into the building and lowered the harness from a window above the air conditioning unit, and another member put it on. 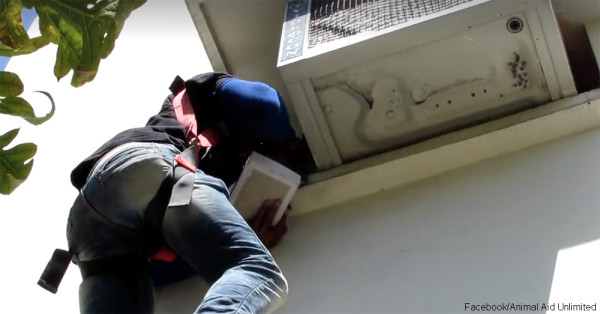 The man carefully held the box with the baby chipmunk in it while his fellow group members slowly pulled him up using the rope. When he got to the nest, he saw the baby chipmunk wasn’t an only child, as there were three other babies. He placed the chipmunk back in the nest so it could be reunited with its family, and then the rest of his group lowered him back to the ground. To see how the entire rescue went down, check out the video that Animal Aid Unlimited posted on its blog.A few kind residents and the amazing members of Animal Aid Unlimited were able to quickly help a chipmunk family out in its time of need, showing that humans really do work well together to save animals. For another great animal rescue, watch this group of people save a dog trapped in a reservoir.