A stray dog in Levy County, Florida, wandered the streets with a male companion. Both dogs ended up in shelters, but the female dog, nicknamed Missy, was pregnant with puppies at just two years old. Levy County Animal Services had a new problem on its hands because Missy was about to give birth.

When Missy, a cur mix, first arrived at the shelter she didn’t look pregnant at all. Then, the 60-pound pooch filled out quickly. That’s when Paws Rescue Group of Seminole, Florida, a no-kill shelter, took her in and rescued her. The second shelter took her to the veterinarian for a medical checkup. The vet determined Missy had about three to seven days before the puppies would come out, so volunteers at Paws Rescue Group sprang into action. 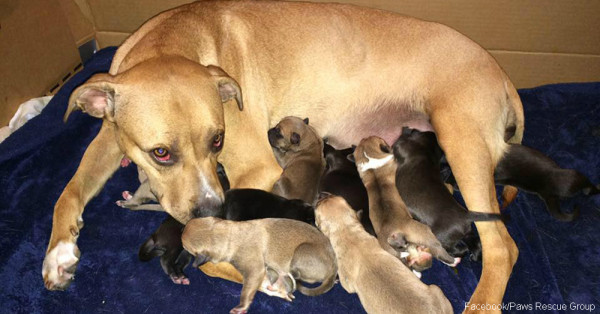 The shelter made a whelping box and lined it with a comfy blanket to get ready for Missy’s big day. The new mom gave birth to nine puppies at first, and one didn’t make it. When staff arrived the next morning, she had given birth to three more and one didn’t survive. Missy had a total litter of 10 puppies less than three weeks after her rescue, and the doting mom was very attentive to each one. She fed them, protected them and kept a close watch over each puppy until they were old enough to become more independent. 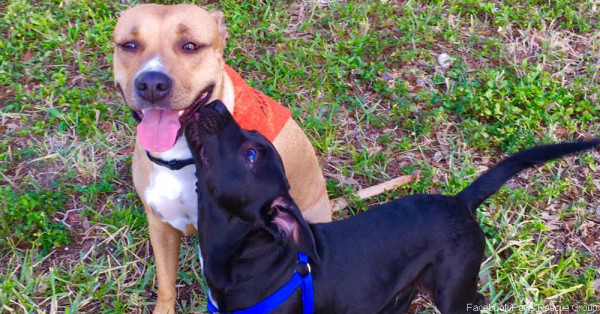 Once Missy’s puppies were old enough to be adopted, she could also find her forever home. Thanks to some loving families from all around Florida, all 11 dogs found new homes. The rescue shelter documented Missy’s brood, and the shelter had a huge party on a Saturday afternoon to celebrate the adoptions of all 11 dogs. Although Missy might miss her puppies, her new mom says Missy looks almost exactly like the shelter dog her son rescued, so it was quite a coincidence. Missy’s joyful story was successful thanks to a no-kill shelter that took her in and helped her with the adorable puppies. Check out another lucky rescue mom who found her forever home with this video.