2016 has been a tumultuous year for British politics, but one resident of Downing Street isn’t going anywhere. He just happens to be a cat. Larry the cat was adopted by David Cameron, the prime minister at the time, in 2011. 10 Downing Street had a serious mouse problem, and Larry had supposedly developed a reputation as an excellent mouser during his time at the Battersea Dogs and Cats Home, an animal rescue organization. After he was adopted, Cameron gave him the official title of Chief Mouser. Larry became the first cat to hold this title and the public took note. 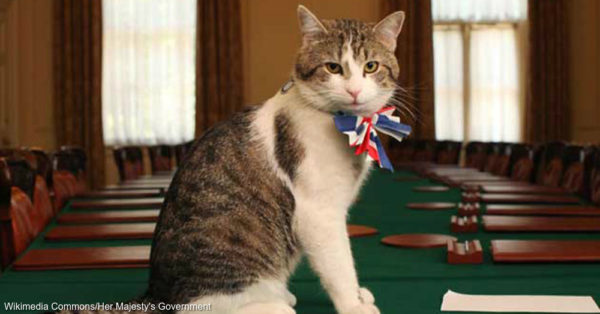 Unfortunately for Larry, his hunting prowess may have been somewhat exaggerated. The British press decried his laziness and lack of skill, although it was all in good fun. He developed a reputation for spending more time relaxing on the antique furniture and seeking affection from press teams and other visitors, including such dignitaries as President Obama, than he did hunting mice. 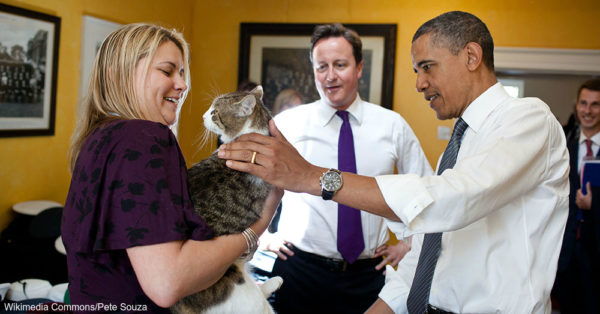 Larry did eventually settle into his role, although the public was hesitant to believe it until an eyewitness reported seeing the cat sitting outside 10 Downing Street with a dead mouse. However, he still prefers to spend most of his time napping and relaxing.

Larry’s tale quickly caught the public imagination, and he became quite a celebrity. His adoring public sends him treats and other gifts on a daily basis, which probably doesn’t help his motivation. He has become a fixture at 10 Downing Street, and even withstood another cat’s attempt to steal his job.

When the public became aware of Cameron’s plans to step down, many of Larry’s fans were concerned for the cat’s future, but they shouldn’t have worried. Theresa May, the incoming prime minister, plans to retain Larry as Chief Mouser at Number 10. Larry the cat has captured the heart of the British public despite his humble origins as a rescue cat. Help break down the stereotypes that keep other deserving shelter cats from finding homes.