After a fight with the city of Hamilton, Ontario, Sheldon the pig’s human family finally obtained a license to keep him. Under Hamilton law, only people who’d obtained a license to own a pig before 2012 could keep one in their home. Sheldon’s people didn’t get their license until the summer of 2016. Sheldon was a sick little piglet when Diane Hines and Jay House adopted him in 2011. Hines worked diligently to restore him to health, spending $6,000 within the first hours of his arrival, according to CBC. She was so preoccupied with him getting better that she simply forgot to get a license to keep him. 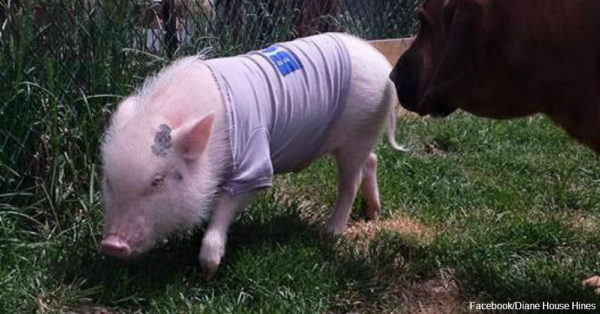 As of 2016, the Vietnamese potbellied pig had grown into a substantial sugar-pink porker with patches of gray on his head. At the time of the kerfuffle with the city, he weighed 80 pounds, though a potbellied pig can weigh as much as 150 pounds, posits SeaWorld Parks & Entertainment. The couple’s neighbor was alarmed enough to notify the authorities of his existence, and it was after this that the Hamilton powers that be told Hines and House that Sheldon had to clear out. But the humans were so attached to Sheldon that the thought of life without him was unbearable. He was cleaner, quieter and more peaceable than a dog, they claimed. He slept in their bed. Hines grew special fruits and vegetables for him in her garden to maintain his health, and she believed that if Sheldon was sent away, his health would deteriorate. 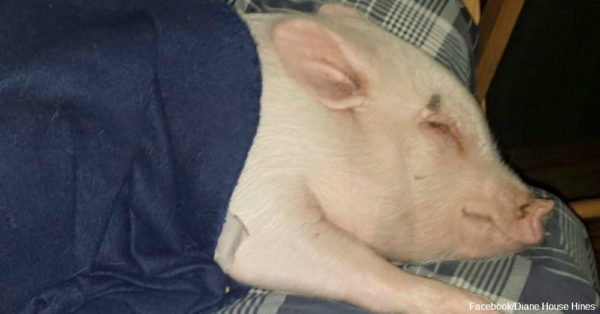 When the bylaw came into effect, Hines contacted the city’s animal control services to find out if there was some way she and House could keep Sheldon. She scrabbled for documentation to prove that she’d had the pig since before 2012 and started a petition online to reverse the bylaw. Hines and House were even willing to move to a city that accepted keeping potbellied pigs as pets. Fortunately, she did find enough documentation and pay enough fees to convince the city of Hamilton to give her and House a license to keep Sheldon, says CBC.

However, their victory isn’t enough to keep the couple in Hamilton. They run an animal hospice called Lazy Dazy and need a larger plot of land to expand it. Animal lovers Diane Hines and Jay House were lucky enough to find the paperwork that let them keep their beloved potbellied pig. Read the story of Master Julian, another little rescue pig.