Imagine coming home one night after dinner and not being able to find your dog. She’s not a chihuahua, mind you, but a 120-pound Great Dane. After searching for about 40 minutes, you find her, 20 feet off of the ground, stuck in a tree. That’s exactly what happened to Nebraska resident Wes McGuirk in April 2016. While searching outside his house for his missing dog, McGuirk heard sounds above his head. He looked up and saw Kora, his 16-month-old Great Dane, about 20 feet above him in a tree in his backyard. 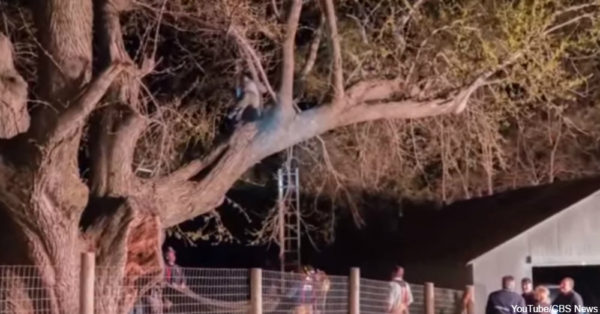 After getting over his initial surprise, he got a ladder and tried to get her down, but his ladder was too short. His next step was to call for help. Meanwhile, a neighbor climbed the tree to keep Kora calm until help arrived.

The Plattsmouth Volunteer Fire Department responded, along with the Elmwood Volunteer Fire and Rescue Department and the Cass County Sheriff’s Office. When the call came in, Plattsmouth’s Lieutenant Jon Hardy wondered if it was a joke. His department was filling in for Louisville, Nebraska’s emergency units that evening, so they went to the McGuirk home. Once there, Hardy saw exactly what McGuirk had described. 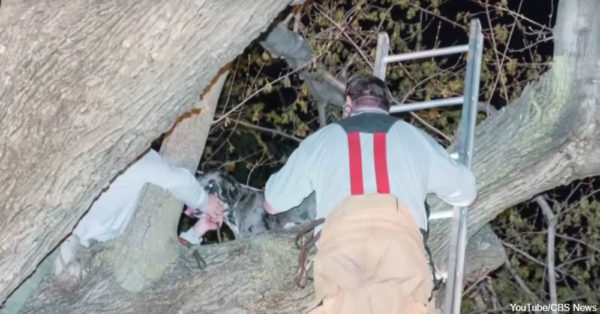 Using their training, skill and equipment, including a tarp and dog harness from their K-9 unit, the team of 15 responders worked together to rescue the big dog. They put the harness on her and then added a leash to it. Next, they created a safety net using the tarp. Finally, they gently encouraged the huge canine to leave its tree perch. Kora plopped into the tarp, jumped out, and headed for her house as if she had finished a typical evening romp.

Hardy said it was the first time in his 12 years that the department had ever rescued a dog from a tree. So how did Kora end up in the tree? One theory is that she got caught up in a raccoon chase and then realized she couldn’t go back the way she came. However it started, Kora’s tree adventure ended happily for everyone.