Hannah West and Mark Jefferies were happily married on May 7 at Dumbleton Hall, but it was Hannah’s 28-year-old sister and maid-of-honor, Faye, who made it a truly unforgettable occasion. Everyone was taking wedding photos when there was a commotion by the lake. A big black swan was bullying a young gosling, and Faye wasn’t about to let that stand.According to Gloucestershire Live, Faye was in the middle of taking photos with the rest of the wedding party when, all of a sudden, everyone heard squawking and splashing. The sounds were coming from two geese, whose gosling a menacing black swan was attempting to drown. 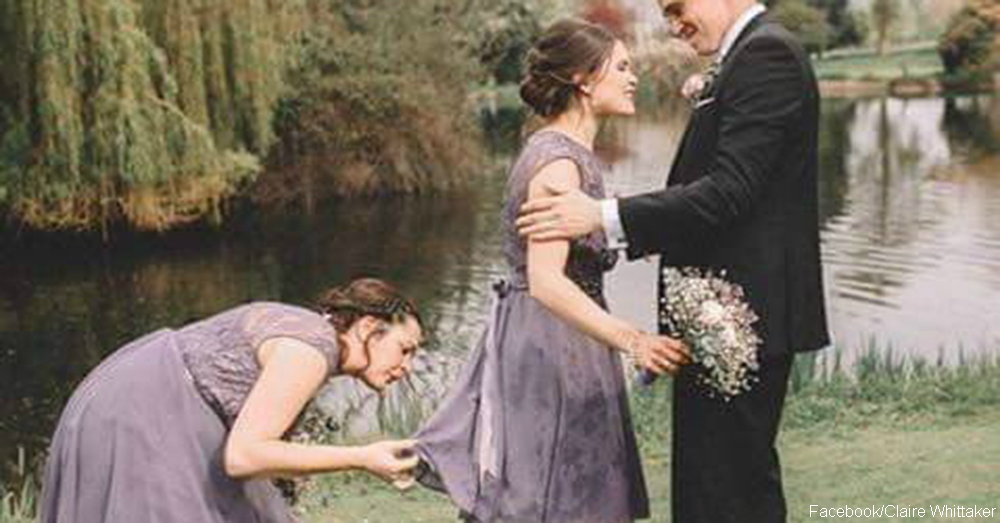 Photographer Rosie Hardy told The Huffington Post that she saw everything at the lake as it unfolded and shouted, “Can someone do something?” She figured someone could use a stick to scare off the swan before it killed the gosling. Little did she know that Faye was a step ahead of her, as the maid-of-honor had already kicked off her heels and dashed over to the lake. The second she got near the swan, it realized she meant business and retreated.

Faye took the gosling in her hands and returned it to its parents, and both geese squawked in appreciation before they left. Although Faye’s dress had gotten wet, she returned to take more photos, and Rosie even got one of her in the lake. The photographer posted the story on Facebook, and it made Faye into quite the celebrity, getting over 4,000 likes. Faye is planning to get married in September, but not near a lake, so a repeat of the gosling rescue does not look forthcoming.Faye wasn’t afraid to leap into action to save a baby animal, but there are plenty of other ways to help animals in need. Fund 14 bowls of food for rescues, for example, and add some splashy fun to your bath.