An animal rescue team brought four cats and a dog to the DeKalb County Animal Services facility in a suburb of Atlanta, Georgia, after the pets’ owner died. To give each animal the best care, staffers with LifeLine Animal Project, which manages the facility, separated the dog from the four cats. As Flearoy the dog was being taken out to play a few days later, he and the shelter’s foster coordinator Brandi Crabtree passed the cat room. The excited canine made Brandi detour into the room, where Flearoy enjoyed a brief but happy reunion with three of his four cat buddies, who were adopted soon after. Flearoy hadn’t seen his fourth friend, Andie, who was still in recovery at the shelter’s veterinary clinic. Once Andie’s condition improved, she was taken to the cat room, and that’s when it happened: Flearoy and Andie were reunited in a flurry of enthusiastic tail wags, licks and purrs. 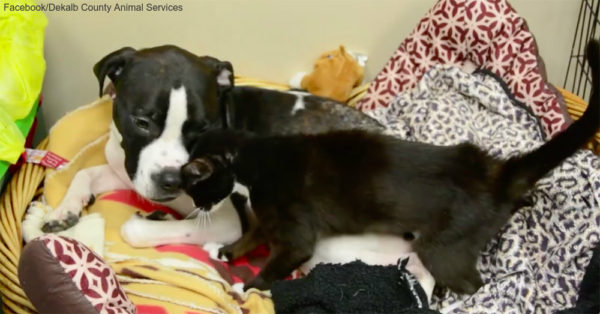 The shelter staff decided to let the two stay together in the shelter office, where Flearoy had been living. The joyful couple cuddled constantly and were like two peas in a pod, according to LifeLine’s Karen Hirsch. 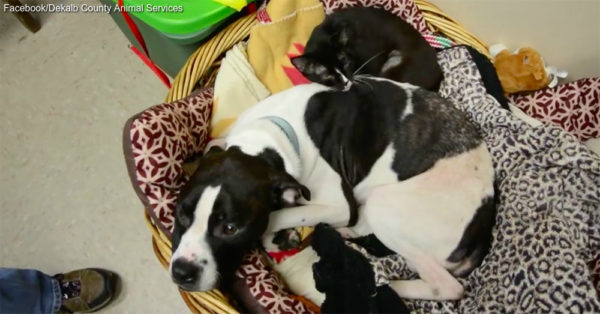 Flearoy and Andie had such a close relationship that the shelter staff didn’t want the pair to be separated again. Everyone hoped that someone would adopt them both. Happily, their wish was granted. In July 2016, Ali Carter adopted the two friends and had another dog sibling ready to welcome them with open paws. The two inseparable pals are safe, content and thrilled to have a new home together.LifeLine Animal Project is a nonprofit agency that works to make the Atlanta area a no-kill community. The happy ending they helped bring to the Flearoy and Andie story is another victory for lovers of dog and cat couples everywhere. Check out this video to see another happy dog and cat couple.