Firefighters from the Winchendon, MA Fire Department came up with a slippery solution when faced with a kitty trapped in a sewer grate. The 1-year-old cat had somehow made her way into the storm drain and, in trying to make her escape, had gotten her head trapped in the grating, leaving the terrified animal hanging in mid-air and fighting for her life. 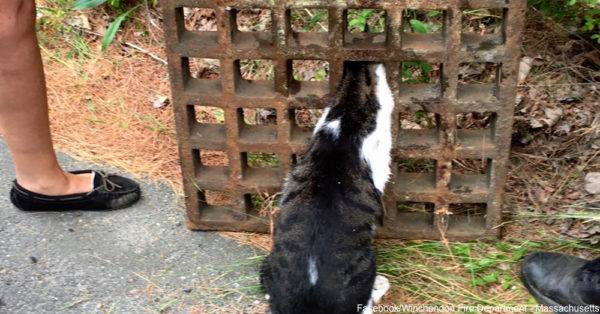 The poor creature was having difficulties breathing and would undoubtedly perish unless the firefighters took prompt action. The firefighters immediately got to work and quickly removed the entire grate with the cat still attached. They then turned the grate on its side and helped support the anguished animal while they worked out the best way to free her without causing harm and further distress. 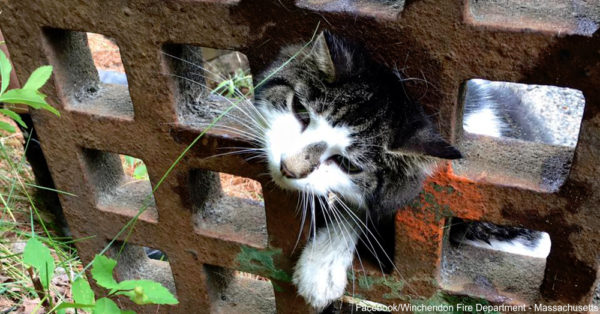 Fortunately, a quick and easy solution soon became apparent to these kindly workers. When the cat’s owner appeared on the scene, the quick-thinking team sent him back home to find some dish soap. When the cat’s owner returned with the soap, the firefighters spread the slippery solution around the cat’s neck and gently eased her head out of the grate, much to the delight of onlookers. 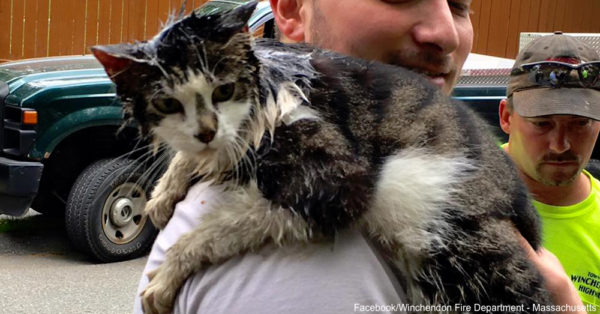 Apart from looking somewhat dazed and bedraggled, the young cat appeared to suffer no ill-effects following this traumatic event. Hopefully, she’ll learn from this experience and not venture into storm drains again as she prowls around her neighborhood. If cats really do have nine lives, she’s now down to eight. For the firefighters, this happy ending was all in a day’s work and made a great good news item for the department’s Facebook page. It is certainly a twist on rescuing cats stuck up in trees. Cats aren’t the only animals that get into difficulties in storm drains. Read how members of the Arvada PD waded to the rescue after being dispatched to assist some more fluffy creatures in deadly peril.