A four-month old puppy lucked out when a group of Kansas City Royals fans left a Sunday baseball game at Kauffman Stadium early. According to The Kansas City Star, the temperature was in the low 90s when Josh Lee and his family came across the whimpering pup in the backseat of a locked car. The windows were cracked, but the pup had no water. With the help of staff members from the Royals’ guest services department, the rescuers were able to get a door open and pull out the overheated animal. 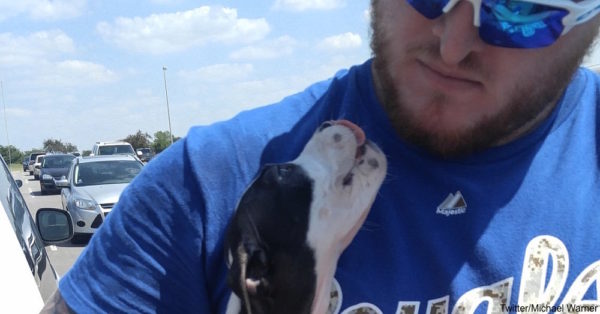 Tail wags and puppy kisses were freely given by the delighted pup after a much needed drink of water. The dog was taken to the guest services office, but the owners never claimed him. The next day, the pup went to the KC Pet Project. After getting a veterinary checkup and vaccinations, he was ready for adoption.

One of the rescuers, Michael Warner, was hoping to adopt the dog, but he lives in Independence, Missouri. That city bans pit bulls. Instead, the pup was adopted by a Royals’ stadium staffer. Warner was disappointed but happy the affectionate animal was going to a good home. 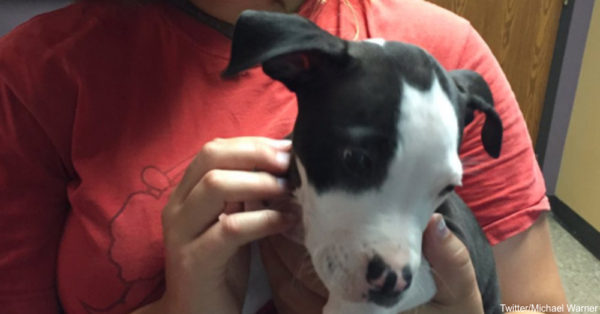 Leaving an animal or a small child in a hot car can be life threatening. General Motors did a study showing how quickly the inside of a car heats up. For example, using an outdoor temperature of 80 degrees, within 10 minutes, the indoor car temperature climbed to 99 degrees. After 30 minutes, the car temperature was 114 degrees. Dogs, which don’t sweat, as well as small children, can easily die from heatstroke. All it takes is a little common sense to prevent this type of potentially tragic situation. Luckily this pit bull puppy story has a happy ending. The little guy had some “baseball angels” watching over him.