Life hasn’t been easy for Rexi, a golden retriever with a deformity that affects both of her front legs. Fortunately for her, she’s part of a loving family that has vowed to stick by her regardless of her condition. Now, her human family is hoping to find an invention or surgery that could at least help their companion live an easier life. According to Life With Dogs, Rexi’s family could always tell that she had some sort of condition that made her different, but it really became apparent when she reached about 10 weeks old. She was limping, but nothing abnormal showed up on the X-rays. Her family took her to another vet, who diagnosed her with the neurological disorder. 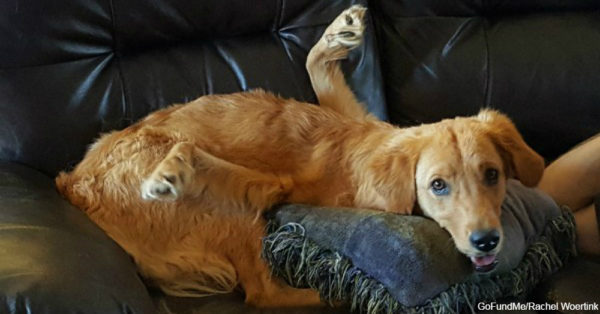 The disorder left Rexi unable to use her front legs. Those legs are also deformed, extending upwards past the dog’s head. The vet recommended that the family consider putting her down. For Rachael Woertink and James Cassity, Rexi’s human parents, that just wasn’t an option.

They don’t have any children, but to them, Rexi is like their child. It’s not her fault that she has this condition, and the couple plan to stand by their companion through thick and thin. 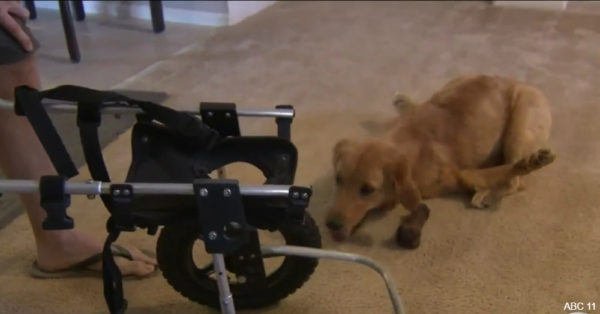 ABC 11 News reports that the family tried getting Rexi a vest and wheelchair to help her. Currently, she moves around by pushing with her hind legs and scraping her chest along the ground. Unfortunately, the wheelchair didn’t work well, as Rexi flipped over whenever she hit a rock. James decided after one or two flips that enough was enough, as he didn’t want to risk injury. The couple is spreading the word about Rexi’s condition in hopes of meeting a doctor or anyone with an idea of how to help their dog. What’s most inspiring is Rexi’s positive attitude in the face of her condition. Meet more animals who keep a happy face despite their disabilities.