The idea of dogs in the wedding party is nothing new, but Shahr Nouraini and Peter Rushton took that idea to a new level. Peter and the couple’s photographer, Sol Tamargo, surprised Shahr by strapping GoPros to three rescue dogs from a local shelter. Dog-loving Shahr was thrilled with the surprise. The idea started when the couple decided to ask wedding guests to donate to the Playa Animal Rescue, a local animal shelter in Riviera Maya, Mexico, where the couple got married. They mentioned their love of dogs and their plans to help the local shelter at the initial photography consultation. Their photographer evolved this idea into using some of the dogs from that very shelter as guest videographers for the day. He took the idea to Peter, who loved the idea. 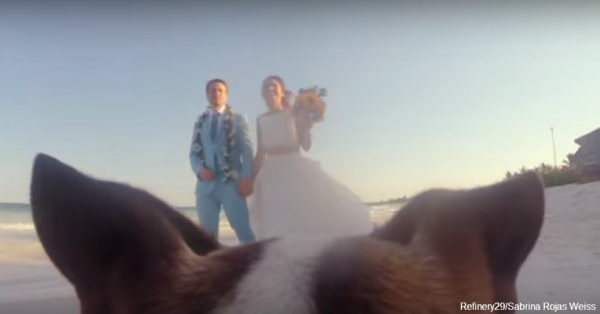 The co-conspirators strapped GoPros onto Zac, Daphne and Daisy, three dogs representing Playa Animal Rescue. Shahr burst into tears after seeing the camera-equipped dogs. It’s safe to say this was one of the best gifts of the wedding for Shahr. The puppy videographers fit right in with her love of animals, and the guests loved petting the dogs. There’s just something about a furry friend that brings a fun, playful feeling to any event. 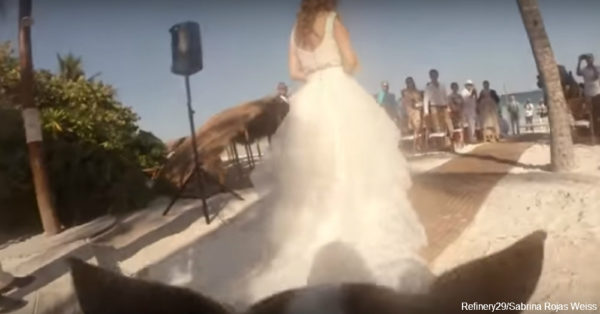 Video footage from the GoPro cameras gave the couple a different perspective on their wedding day. The dogs also came with handlers to make sure they didn’t cause any canine mischief during their serious duties as videographers. Daisy and Daphne, two of the canines with budding film producing careers, have since been adopted into their own loving homes. Don’t feel bad for Zac; an employee at the shelter already owns him, so all three pups are in good hands. This dog-recorded wedding just goes to show there are many ways to involve animals on your wedding day. For more wedding fun, check out these dachshund nuptials.