It’s sad enough that Michaella, a beautiful English mastiff, gave birth to a litter of stillborn puppies. The abuse she suffered at the hands of her owner afterwards is what makes her story even more heartbreaking. Fortunately, under the loving care of Pennsylvania’s Creature Comforts Veterinary Service, Michaella has recovering from her ordeal. What happened to Michaella is hard to believe. According to WNEP 16 ABC, Michaella’s owner, Brandon Cramer, thought she needed to be euthanized because her litter was stillborn.

Instead of taking her to the vet, Cramer hit her with a hammer and then stabbed her multiple times before leaving her for dead. 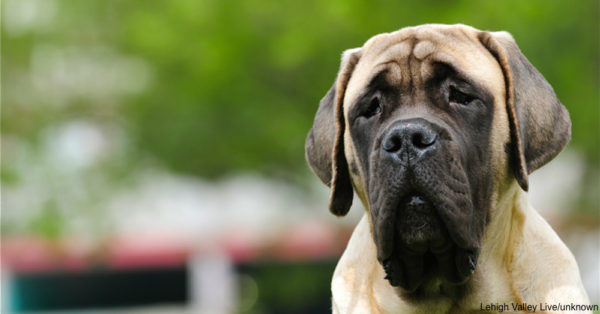 Michaella was a fighter, though, and she survived the trauma. Lehigh Valley Live reports that she was taken to Creature Comforts Veterinary Service in February of 2016. In addition to her severe wounds, Michaella also had hypothermia.

The vet provided emergency care, and Michaella spent the next three weeks in a coma. Since her paws were all frostbitten, the vet eventually had to amputate them. 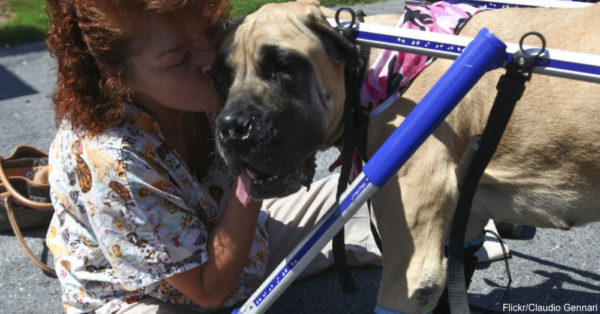 Slowly but surely, Michaella got better. She now has a special wheelchair, called a quad cart, that has four wheels and supports to help her move around. The skin on her legs is healing, and the vet can give her four prosthetics soon. Perhaps most importantly, Michaella is happy, with her tail constantly wagging when she spends time with the staff at Creature Comforts.

As for Michaella’s scumbag of a former owner, he got the multiple animal cruelty charges that he deserves. According to WFMZ 69 News, the authorities also rescued his other dogs. It’s terrible what happened to Michaella. We’re just glad that she is happy, getting better and using her awesome doggy wheelchair. Did you know they make wheelchairs for cats, too? Meet a kitty named Cassidy who gets around with wheels where her hind legs should be.